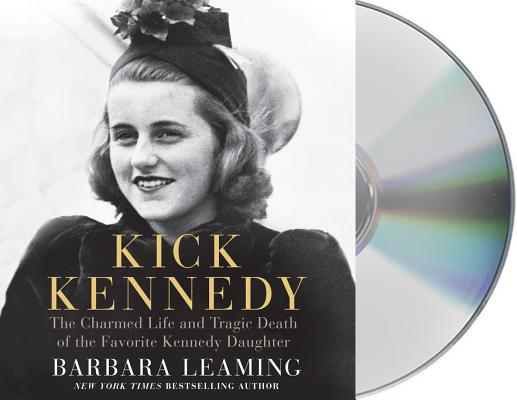 Kathleen “Kick” Kennedy was the incandescent life-force of the fabled Kennedy family, her father’s acknowledged “favorite of all the children” and her brother Jack’s “psychological twin.” She was the Kennedy of Kennedys, sure of her privilege, magnetically charming and somehow not quite like anyone else on whatever stage she happened to grace.

The daughter of the American ambassador to the Court of St. James’s, Kick swept into Britain’s aristocracy like a fresh wind on a sweltering summer day. In a decaying world where everything was based on stultifying sameness and similarity, she was gloriously, exhilaratingly different. Kick was the girl whom all the boys fell in love with, the girl who remained painfully out of reach for most of them.

To Kick, everything about this life was fun and amusing--until suddenly it was not. For this is also a story of how a girl like Kick, a girl who had everything, a girl who seemed made for happiness, confronted crushing sadness. Willing to pay the price for choosing the love she wanted, she would have to face the consequences of forsaking much that was dear to her.

Bestselling and award-winning biographer Barbara Leaming draws on her unique access to firsthand accounts, extensive conversations with many of the key players, and previously-unseen sources to transport us to another world, one of immense wealth, arcane rituals and rules, glamour and tragedy, that has now disappeared forever. It was a world of dukes and duchesses, of grand houses, of country house weekends, and of wild rich boys. But it was also a world of blood and war, and of immeasurable loss.

It was a time of complete upheaval, as reflected in the life of this most unlikely and unforgettable central character. Kick Kennedy reveals her story, that of a young girl learning about love, sex, and death--and doing it all at warp speed as the world races toward war and then reels in the war’s chaotic aftermath. This is the coming-of-age story of the female star of the Kennedy family, and ultimately a tragic, romantic story that will break your heart.

Eliza Foss has performed in numerous theaters both in New York City and around the country.  She's performed in Ten Unknown, Natural Selection, and Angels Don't Dance, among others.  She has appeared in the films Split Ends and Chutney Popcorn as well as on television in Law & Order and The Merrow Report.  She holds a M.F.A from the New York University Graduate Acting Program. Eliza has narrated over thirty audiobooks and short stories, including The Mermaid Chair by Sue Monk Kidd, The Beck Diet Solution by Judith S. Beck, and Big Love by Sarah Dunn.  She was featured in AudioFile magazine as one of “audio’s hottest romance narrators.”
Loading...
or
Not Currently Available for Direct Purchase