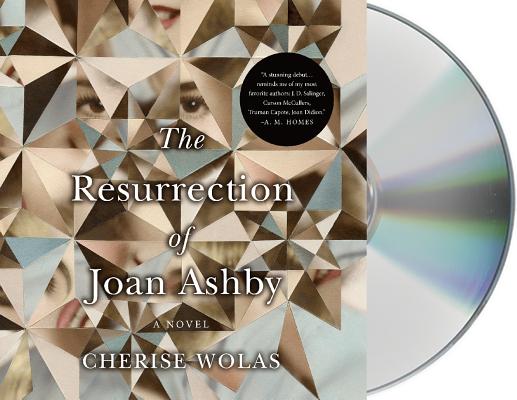 The Resurrection of Joan Ashby

“I've always admired people who knew what they wanted to do from an early age, whether that was to be a doctor, a marine biologist, or a writer. Enter Joan Ashby, a young girl determined never to marry and certainly never to have children; then she does both, and that is when her tale truly begins. Not only are we privy to her life's story, we get to read some of her short stories and parts of her developing novels - the stories within the story, if you will. The only thing any of us know for sure, except for death and taxes, is that the hoped-for path is never straight and never predictable. I flat-out loved this book!”
— Anne Holman, The King's English, Salt Lake City, UT
View the List

"That I got so worked up about a person who doesn't exist is a testament to Cherise Wolas's success in creating a complex and distinct fictional character." — The New York Times Book Review

Epic, propulsive, incredibly ambitious, and dazzlingly worded, The Resurrection of Joan Ashby is a story about sacrifice and motherhood, the burdens of expectation and genius. Cherise Wolas’s gorgeous debut introduces an indelible heroine candid about her struggles and unapologetic in her ambition


Praise For The Resurrection of Joan Ashby: A Novel…

“Ambitious...Intimate...There is a terrific twist midway through…Reads like a juicy 19th-century tome…That I got so worked up about a person who doesn’t exist is a testament to Wolas’s success in creating a complex and distinct fictional character. Joan Ashby is like no writer I have ever encountered; I’m sure, if she were real, she would be pleased to hear it.”
—The New York Times Book Review

“The novel is too ambitious to ignore. Wolas’s own talent is undeniable. It’s even more impressive, considering that this is her first book.... It is among the most thrilling prose I have read in a long time.” —Lillith

“This breathtaking...novel will do for motherhood what Gone Girl (2012) did for marriage. ‘A story requires two things: a great story to tell and the bravery to tell it,’ Joan observes. Wolas’ debut expertly checks off both boxes.”
—Booklist, starred review

“It’s almost impossible to believe that The Resurrection of Joan Ashby…is the first novel by Cherise Wolas, a lawyer and film producer. Gorgeously written and completely captivating, the book spans decades and continents, deftly capturing the tug so many women feel between motherhood and self-identity.”
—BookPage

“Love and betrayal and expectation, all encapsulated in the story of one woman, Joan Ashby, and the surprises and disappointments of her life. Wolas' debut turns a critical and perceptive eye onto the complications and expectations of marriage. It’s also gorgeously written. Get into it.”
—Southern Living

“You will not come away unchanged, and you will continue to think about Joan Ashby’s path long after you put this brick down…a masterful (mistress-ful? We need a better modifier…) debut novel that dares to consider whether becoming a mother is worth it, or not.”
—LitHub

“The scope of The Resurrection of Joan Ashby, the breadth of its engagement with the reader, the impressive realization of its ambitious literary character, all resonated so deeply that the pages of these other books offered naught but hollow echoes. Not only had Wolas succeeded in creating a character presented as a literary icon, complete with accompanying primary text, but she powerfully engaged the reader through an exploration of personal identity.”
—Publishers Weekly’s Shelf Talker

“...a tour de force. And while I accept that it is a debut, I am shocked by it. It’s, for me, like the literary equivalent of Athena springing fully formed from the head of Zeus.”
—Kirkus Review’s Fully Booked podcast

“Remarkable...There is power in the artistry of Cherise Wolas’ empathetic and resonant portrait of Joan Ashby, a woman who struggles every day to understand herself and to live the life that is true and authentic for her, despite demands and expectations to the contrary. Joan Ashby is every woman.”
—Full Stop

“Astonishing...a gorgeous read, big and bold, intelligent and thought-provoking...an incredible book that reads nothing like a debut, so self-assured the writing, so expansive and wholly immersive the plot.”
—Independent, Ireland

“A stunning debut—because there is nothing debut about it. It arrives so fully realized that it stuns as it entertains, as it twirls the reader on the sharp point of a #2 pencil. Wolas is a writer in full command of some impressive powers—one might even call them special powers. There is a joyous embrace to her work—to her exploration of the life and mind of her main character, the author Joan Ashby. Ashby is so well rendered that I found myself jealous of her (and Wolas) and also wishing she were my best friend and that we had a standing drinks date. Wolas is singular in her voice—and yet the delicacy, the specificity reminds me of my most favorite authors: J.D. Salinger, Carson McCullers, Truman Capote, Joan Didion.”
—A.M. Homes, New York Times bestselling author of May We Be Forgiven, Winner of the Women's Prize for Fiction

“This is the kind of book that pulls you under and you go willingly. And when it’s over, you come up for air and see anew. In giving us the story of one woman’s struggle to write her own life, Wolas captures worlds in worlds here, and lives in lives. As many currents run in a single river, The Resurrection of Joan Ashby is rich and wide, and deep.”
—Sarah Blake, New York Times bestselling author of The Postmistress

“Cherise Wolas has delivered an audacious and dynamic first novel. The Resurrection of Joan Ashby is a remarkable tapestry of literary skill, emotional insight, and sensational storytelling.”
—Ivy Pochoda, author of Visitation Street

Cherise Wolas lives in New York City with her husband. She is the author of two novels, The Resurrection of Joan Ashby and The Family Tabor.
Loading...
or
Not Currently Available for Direct Purchase