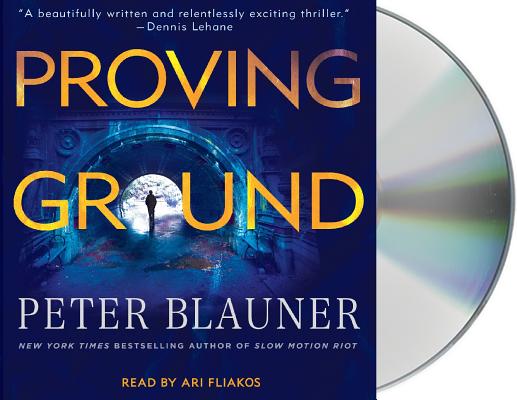 "Ari Fliakos gives a splendid performance. His versatile voice and energy enliven the many characters in this thriller." — Library Journal

"Ari Fliakos enhances an exciting story with his expert narration. He gives everyone a unique identity, differentiating them through varying tones, voices, and accents." — AudioFile Magazine

Proving Ground is Peter Blauner’s first audiobook in more than a decade. It is at once a sweeping crime narrative, an intricate story about the quest for redemption, and a vibrant portrait of contemporary New York City, all told in Blauner’s singular voice.

"Ari Fliakos enhances an exciting story with his expert narration. He gives everyone a unique identity, differentiating them through varying tones, voices, and accents. ...Another example of a well-paced story that is significantly enhanced by a narration built on appropriate voices." -AudioFile

"Ari Fliakos gives a splendid performance. His versatile voice and energy enliven the many characters in this thriller. Those who like a compelling and believable thriller with more than one startling twist will find this to be a wonderful experience." -Library Journal

"Over the last 25 years Peter Blauner has proven to be a master of the urban darkside, his crime novels suffused with a knowing compassion for the bottom dogs who live in the Minotaur's maze that is New York City. Proving Ground is one of his finest efforts."
--Richard Price

"Peter Blauner’s new novel, Proving Ground, is an old-school page-turner, as war-damaged army vet Nathaniel 'Natty Dread' Dresden and police detective Lourdes Robles close in on the killer of Natty’s father…and, maybe, each other. Taut narration, spot-on dialogue, and sharply etched action sequences make this one a must read. I couldn’t put the sucker down."
—Stephen King

“A new Peter Blauner novel is cause for celebration, and Proving Ground justifies the wait. This is a thoughtful, nuanced novel of crime and war and the human heart. Blauner's authentic and powerful writing is worthy of comparison to Richard Price and Dennis Lehane, and his story is coiled with emotional impact. Not to be missed.”
—Michael Koryta

"Peter Blauner's first book in ten years, Proving Ground, is a showstopper. A tour-de-force of smart, gutsy, relentlessly entertaining storytelling that counts as one of the finest novels I've read in the past five years. Blauner has a painter's eye for detail, a playwright's ear for dialogue, and a film director's kinetic narrative vision. All combine to create a turbo-charged reading experience. Proving Ground is a masterpiece of contemporary fiction."
—Christopher Reich

"Proving Ground is a startlingly powerful tale of lost lives and lost souls with a crackling crime drama at its core. No one understands the NYPD, the backroom politics of New York, nor the heart of the city like Blauner. No one."
—Reed Farrel Coleman