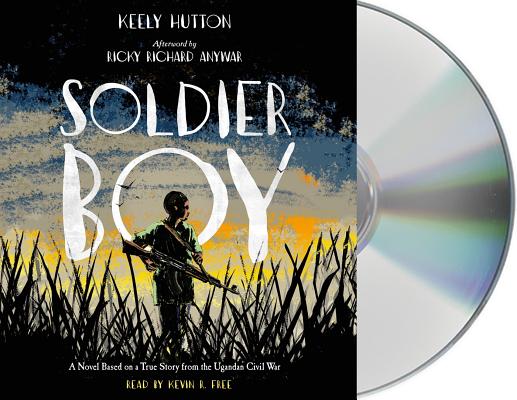 "Powerful writing based on the real life of Ricky Anywar is heightened by narrator Kevin R. Free's dramatic reading. Free's use of an African accent carries readers to the Ugandan setting and the stories of two characters — one real, one fictional." — AudioFile Magazine

Soldier Boy begins with the story of Ricky Richard Anywar, abducted at age fourteen in 1989 to fight with Joseph Kony's rebel army in Uganda’s decades-long civil war. Ricky is trained, armed, and forced to fight government soldiers alongside his brutal kidnappers, but never stops dreaming of escape.

The story continues twenty years later, with a fictionalized character named Samuel, representative of the thousands of child soldiers Ricky eventually helped rehabilitate as founder of the internationally acclaimed charity Friends of Orphans.

Working closely with Ricky himself, debut author Keely Hutton has written an eye-opening audiobook about a boy’s unbreakable spirit and indomitable courage in the face of unimaginable horror.

Praise For Soldier Boy: A Novel Based on a True Story from the Ugandan Civil War…