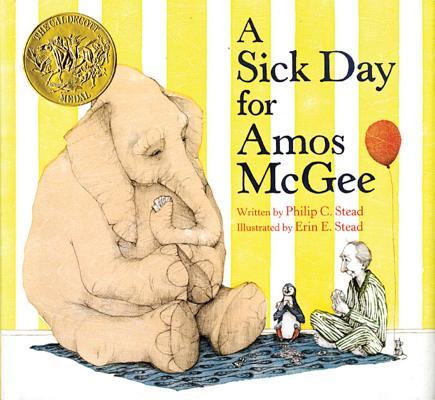 A Sick Day for Amos McGee from Philip C. Stead, illustrated by Erin E. Stead is a 2011 Bank Street - Best Children's Book of the Year and the winner of the 2011 Caldecott Medal. This title has Common Core connections.

Erin E. Stead has illustrated several children's books with her husband, Philip C. Stead. Their first picture book, A Sick Day for Amos McGee, won the Caldecott Medal. She has also illustrated And Then It's Spring (written by Julie Fogliano) and contributed to Eric Carle's What's Your Favorite Animal? The Steads divide their time between Ann Arbor, Michigan, and New York City.

Jim Dale is known to millions of fans as the voice of Harry Potter, as he narrated all of the books in the Harry Potter series. An AudioFile Golden Voice, he has received numerous accolades for his audiobook work. He has won seven Audie Awards and two Grammy Awards for Best Spoken Word Album for Children (for Harry Potter and The Goblet of Fire in 2000 and for Harry Potter and the Deathly Hallows in 2007). He also holds two Guinness World Records: one for having created and recorded 134 different character voices for Harry Potter and the Order of the Phoenix, and one for occupying the first six places in the Top Ten Audiobooks of America 2005.

Dale’s other audiobook credits include A Christmas Carol, Peter Pan, James Herriot’s Treasury for Children, and Around the World in Eighty Days. Dale is also a stage and screen actor, well-known in Britain for his appearances in the Carry On films. He won the 1980 Tony Award for Best Actor in a Musical.

"Consummate narrator Jim Dale brings this story of kindness and empathy to life for little listeners. ...Dale's expressive narration, with an especially endearing Amos, is shared in two versions, the first paired with engaging music and the second with page-turn signals to allow listeners to read along with the charming picture book." -AudioFile