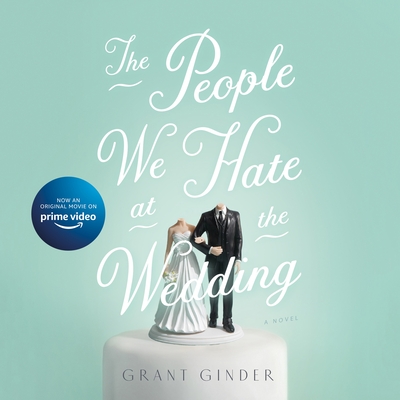 The People We Hate at the Wedding

"It’s for the same audience that flocked to The Nest, Where’d You Go, Bernadette? or dare I say a little book you might be a fan of, Crazy Rich Asians."— Kevin Kwan, New York Times bestselling author of Crazy Rich Asians

Redbook's 10 Books You Have To Read This Summer


Relationships are awful. They'll kill you, right up to the point where they start saving your life.

Paul and Alice’s half-sister Eloise is getting married! In London! There will be fancy hotels, dinners at “it” restaurants and a reception at a country estate complete with tea lights and embroidered cloth napkins.
They couldn’t hate it more.

The People We Hate at the Wedding is the story of a less than perfect family. Donna, the clan’s mother, is now a widow living in the Chicago suburbs with a penchant for the occasional joint and more than one glass of wine with her best friend while watching House Hunters International. Alice is in her thirties, single, smart, beautiful, stuck in a dead-end job where she is mired in a rather predictable, though enjoyable, affair with her married boss. Her brother Paul lives in Philadelphia with his older, handsomer, tenured track professor boyfriend who’s recently been saying things like “monogamy is an oppressive heteronormative construct,” while eyeing undergrads. And then there’s Eloise. Perfect, gorgeous, cultured Eloise. The product of Donna’s first marriage to a dashing Frenchman, Eloise has spent her school years at the best private boarding schools, her winter holidays in St. John and a post-college life cushioned by a fat, endless trust fund. To top it off, she’s infuriatingly kind and decent.

As this estranged clan gathers together, and Eloise's walk down the aisle approaches, Grant Ginder brings to vivid, hilarious life the power of family, and the complicated ways we hate the ones we love the most in the most bitingly funny, slyly witty and surprisingly tender audiobook you’ll listen to this year.


Praise For The People We Hate at the Wedding: A Novel…

"Witty and completely absorbing, The People We Hate at the Wedding is family dysfunction at its best —full of heart, humor, and jealous siblings. This novel is addicting and entertaining and I couldn't put it down!"
-Jennifer Close, New York Times bestselling author of GIRLS IN WHITE DRESSES and THE HOPEFULS

"Not only does it have the best title in the universe, The People We Hate At The Wedding is wickedly smart and shamelessly funny. Grant Ginder brilliantly captures privileged Brits clashing against semi-privileged Americans in the most hilariously cringeworthy ways. Cluelessly self-absorbed, appallingly outrageous, and so very endearing, these are characters I hope to be seated with at the next wedding I attend."
—Kevin Kwan, New York Times bestselling author of Crazy Rich Asians and China Rich Girlfriend.

"It turns out that the people we hate at the wedding are the very people we most love reading about. Grant Ginder's smart, funny novel is madly insightful and contains some of the most delightfully difficult and fabulously flawed characters I've encountered in a long time. I found myself worrying about them as I drove to work, hoping things would turn out well for (almost) all of them."
- Stephen McCauley, bestselling author of The Object of My Affection

Grant Ginder's novels include This is How It Starts, Driver's Education, and The People We Hate at the Wedding. He received his MFA from NYU, where he teaches writing. He lives in Brooklyn.