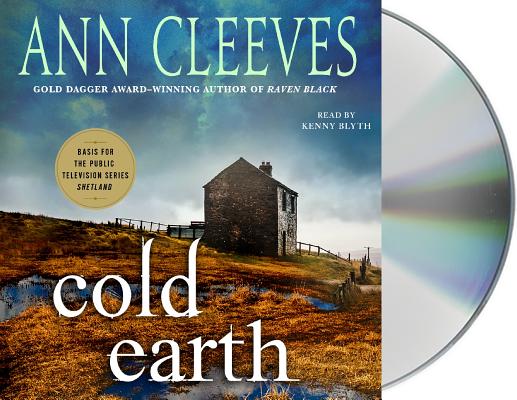 In the dark days of a Shetland winter, torrential rain triggers a landslide that crosses the main road and sweeps down to the sea.

At the burial of his old friend Magnus Tait, Jimmy Perez watches the flood of mud and water smash through a house in its path. Everyone thinks the home is uninhabited, but in the wreckage he finds the body of a dark-haired woman wearing a red silk dress. Perez soon becomes obsessed with tracing her identity and realizes he must find out who she was and how she died.

Cold Earth is the next audiobook in Ann Cleeves’ beloved Shetland series, which is now a major success for the BBC.

"Narrator Kenny Blyth transports listeners to the Shetland Islands with his delightful and easily understood Scots brogue...Blyth's talent with acting and accents makes for an engaging, well-paced listen." -AudioFile Magazine

"Nothing short of riveting." —Louise Penny

"In true Christie fashion, Cleeves once more pulls the wool over our eyes with cunning and conviction." —Colin Dexter, author of the Inspector Morse series

"This sixth in the series of Jimmy Perez Shetland mysteries is every bit as good as we have come to expect from Cleeves." —Reviewing The Evidence

"Cleeves excels in capturing Shetland’s stark, harsh beauty: the windswept land, the gray churning ocean, and hovering clouds. The often gloomy landscape is the perfect setting for tragic death by murder. Always eerie and haunting (thanks to the ghost of Peerie Lizzie) and certainly mysterious, Thin Air is perhaps the best and most compelling in the series so far." —Curled Up

“Cleeves offers up evocative settings and flawed characters with depth, making her mysteries wonderfully addictive. Her latest is no exception.” —Library Journal (starred)

"I didn't expect the final reveal. Those cleverly disguised dead ends had me completely fooled, which is just the way I like it. But I was sorry to say goodbye."—Crime Fiction Lover

"It's easy to admire Vera's brainpower. . . her adventures have been a hit on British television, and readers devoted to Cleeves' tales of Jimmy Perez will want to give Vera a try." —Kirkus Reviews