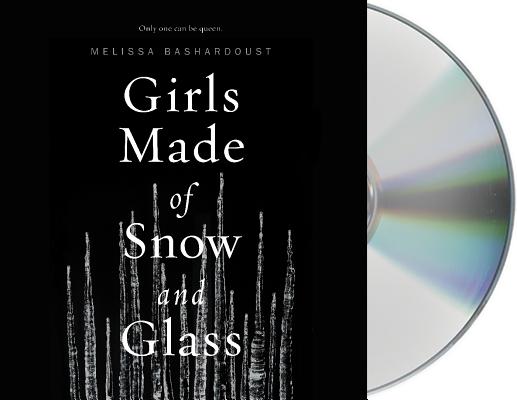 Girls Made of Snow and Glass

"Narrator Jennifer Ikeda's pacing adds drama and intrigue to this twist on the classic Snow White story...listeners will enjoy this fresh take on a traditional tale that is filled with magic and strong female characters who must become allies rather than rivals." — AudioFile Magazine

Enchanting and empowering, this magical new audiobook is an updated version of the classic tale.

At sixteen, Mina's mother is dead, her magician father is vicious, and her silent heart has never beat with love for anyone—has never beat at all, in fact, but she’d always thought that fact normal. She never guessed that her father cut out her heart and replaced it with one of glass. When she moves to Whitespring Castle and sees its king for the first time, Mina forms a plan: win the king’s heart with her beauty, become queen, and finally know love. The only catch is that she’ll have to become a stepmother.

“In Girls Made of Snow and Glass, Melissa Bashardoust has given us exquisite displays of magic, complex mother-daughter relationships, and gloriously powerful women triumphing in a world that does not want them to be powerful. A gorgeous, feminist fairy tale.”
—Traci Chee, New York Times bestselling author of The Reader

“Girls Made of Snow and Glass is like reading a particularly wonderful and vivid dream, complete with imaginative magic, delightful characters, and beautiful language. Melissa Bashardoust's debut novel is everything a fairy tale should be.”
—Jodi Meadows, New York Times bestselling coauthor of My Lady Jane


Praise For Girls Made of Snow and Glass…

"Narrator Jennifer Ikeda's pacing adds drama and intrigue to this twist on the classic Snow White story. ... Listeners will enjoy this fresh take on a traditional tale that is filled with magic and strong female characters who must become allies rather than rivals." -AudioFile

"YOU NEED THIS BOOK. YOU WANT THIS BOOK. This is the timely feminist Snow White you'll want to tell your children. It's more magical than the original, and more imaginative than any Snow White retelling I've read. Girls Made of Snow and Glass is fabulous. And it's absolutely not what you're expecting."
—Allison Seneca, Old Firehouse Books

Melissa Bashardoust received her degree in English from the University of California, Berkeley, where she rediscovered her love for creative writing, children’s literature, and fairy tales and their retellings. She currently lives in Southern California with a cat named Alice and more copies of Jane Eyre than she probably needs. Girls Made of Snow and Glass is her first novel.
Loading...
or
Not Currently Available for Direct Purchase