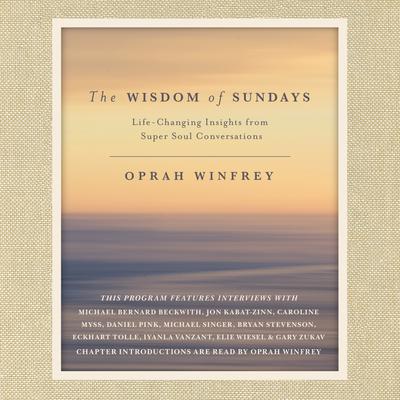 The Wisdom of Sundays (Digital Audiobook)

"Oprah Winfrey's passionate delivery and the wisdom of her Super Soul Sunday television guests overflow with exuberance...it's fully clear how motivated she is to reach her listening audience. The excitement and intention in her voice are inspirational in themselves." — AudioFile Magazine

Oprah Winfrey says Super Soul Sunday is the television show she was born to do. “I see it as an offering,” she explains. “If you want to be more fully present and live your life with a wide-open heart, this is the place to come to.”

Now, for the first time, the aha moments of inspiration and soul-expanding insight that have enlightened millions on the three-time Emmy Award–winning Super Soul Sunday are collected in The Wisdom of Sundays, a beautiful, cherishable, deeply affecting audiobook.

Organized into ten chapters — each one representing a powerful step in Oprah’s own spiritual journey and introduced with an intimate personal essay written and read by Oprah herself — The Wisdom of Sundays features meaningful conversations between Oprah and some of today’s most-admired thought-leaders. Visionaries like Gary Zukav and John Kabat-Zinn share their lessons in finding purpose through
intention and mindfulness. World-renowned teachers like Eckhart Tolle and Michael Singer explain our complex relationship with the ego and the healing powers of love and connection; and award-winning and bestselling writers like Bryan Stevenson and Caroline Myss explore the beauty of forgiveness and spirituality.

This unique audiobook, adapted from the print edition, includes a complete conversation between Oprah and a leading visionary on each chapter’s topic, and Oprah Winfrey reads the original essay she wrote to introduce each chapter.

Over the course of her esteemed career, Oprah Winfrey has created an unparalleled connection with people around the world. As host and supervising producer of the top-rated, award-winning The Oprah Winfrey Show, she entertained, enlightened, and uplifted millions of viewers for twenty-five years. Her accomplishments as a global media leader and philanthropist have established her as one of the most influential and admired public figures in the world today.