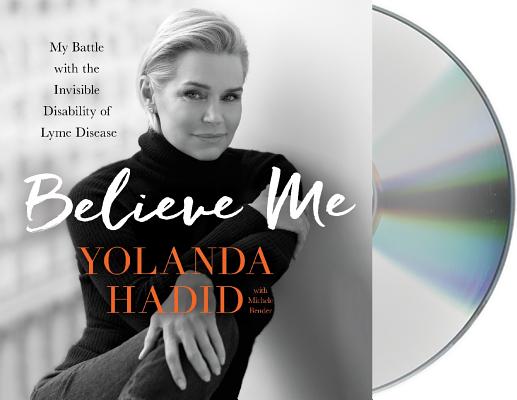 My Battle with the Invisible Disability of Lyme Disease

This program includes an introduction and bonus interview with the author.

From the star of The Real Housewives of Beverly Hills comes an emotional and eye opening behind-the-scenes look at her descent into uncovering the mystery of chronic Lyme disease.

In early 2011, Yolanda Hadid was struck by mysterious symptoms including brain fog, severe exhaustion, migraines and more. Over the months and years that followed, she went from being an outspoken, multi-tasking, hands-on mother of three, reality TV star, and social butterfly, to a woman who spent most of her time in bed. Yolanda was turned inside out by some of the country’s top hospitals and doctors, but due to the lack of definitive diagnostic testing, she landed in a dark maze of conflicting medical opinions, where many were quick to treat her symptoms but could never provide clear answers to their possible causes.

In this moving, behind the scenes memoir, Yolanda opens up in a way she has never been able to in the media before. Suffering from late stage Lyme, a disease that is an undeniable epidemic and more debilitating than anyone realizes, Yolanda had to fight with everything she had to hold onto her life. While her struggle was lived publicly, it impacted her privately in every aspect of her existence, affecting her family, friends and professional prospects. Her perfect marriage became strained and led to divorce. It was the strong bond with her children, Gigi, Bella and Anwar, that provided her greatest motivation to fight through the darkest days of her life. Hers is an emotional narrative and all-important listen for anyone unseated by an unexpected catastrophe.

With candor, authenticity and an unwavering inner strength, Yolanda reveals intimate details of her journey crisscrossing the world to find answers for herself and two of her children who suffer from Lyme and shares her tireless research into eastern and western medicine. Believe Me is an inspiring lesson in the importance of having courage and hope, even in those moments when you think you can’t go on.


Praise For Believe Me: My Battle with the Invisible Disability of Lyme Disease…

Praise for Yolanda Hadid and Believe Me:

"Yolanda honestly shares her and her beloved family's serpentine path to recovery from chronic ailments that plague so many in America.” —Mehmet Oz, M.D., Professor of Surgery, NYP/Columbia

“Challenges are universal. How we face them is what defines us as people. In her inspiring new book, Yolanda shines a light on the puzzling, painful and debilitating reality of living with Lyme. It’s an inspiring story of courage and hope for those diagnosed with the fastest growing infectious disease in America. Her courage is a reminder to us all that with a positive attitude, grit, and the love of family, extraordinary things are possible.” —Tommy Hilfiger

"In the beginning of my Lyme journey, I felt so hopeless because it was mind blowing how many doctors did not acknowledge my symptoms and this disease until I was eventually diagnosed. Yolanda helped me through the initial process and got me to the specialists I needed to start my road to recovery." —Avril Lavigne, Singer/Songwriter

"Yolanda Hadid’s healing journey has led her to search far and wide for answers. Her will to never give up and find answers is an inspiring story for anyone who has been told that he or she has a serious, untreatable illness!" —Dr. Richard Horowitz, New York Times best-selling author of How Can I Get Better? An Action Plan for Treating Resistant Lyme and Chronic Disease

“A well-meaning and often compelling story of one woman's relentless pursuit of an effective treatment for the devastating chronic effects of Lyme disease that should expand public awareness for this deeply misunderstood condition.” —Kirkus Reviews

YOLANDA HADID is a Dutch-American television personality, model, and interior designer. She has been one of the stars of The Real Housewives of Beverly Hills since 2010, and is a sought-after guest on shows from Good Morning America to Dr. Oz. Yolanda is known nationally for her outspoken awareness advocacy for Lyme and chronic disease, and has received a number of awards and accolades for her work in the Lyme awareness community, including the Lyme Research Alliance Award, the Woman of Substance Award, the Global Lyme Alliance Award and the Stand4Lyme 2016 Catalyst for a Cure.
Loading...
or
Not Currently Available for Direct Purchase