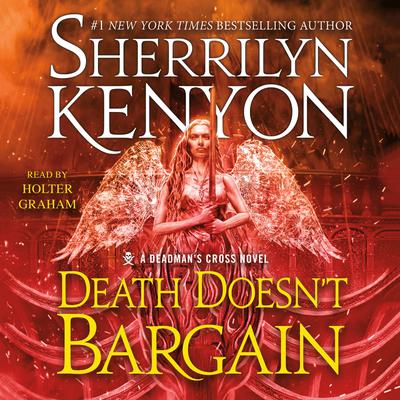 Death Doesn’t Bargain is the second historical fantasy audiobook in New York Times bestselling author Sherrilyn Kenyon’s Deadman’s Cross series. In this chilling audiobook, deadmen tell their tales, and every soul is damned or redeemed by the final choices they make.

The Deadmen are back…

But so are the demons who have broken free of their eternal prison and are bent on mankind’s destruction. The worst of the lot is Vine, determined to claim their lives for taking hers. She will see the world burn…and has the perfect lure to destroy them all. One of their own.

Kalder Dupree has never known a day of mercy. Born to the cruelest of mer-races, he sacrificed himself for his crew and is in Vine’s hands. He expects no mercy or rescue.

Yet Cameron Jack is determined to set Kalder free. As a Hellchaser, it’s her calling, and she cannot allow even a not-so-innocent to be tortured for an act of kindness that spared her damnation.

To defeat evil, it sometimes takes an even worse evil, and Cameron is willing to do whatever she must to make this right. If Vine thought she had her hands full before, she hasn’t seen anything nearly as powerful as Cameron’s resolve.

SHERRILYN KENYON is a New York Times bestselling author and is a regular in the #1 spot. This extraordinary author continues to top every genre in which she writes. More than 60 million copies of her books are in print in more than one hundred countries. Her current series include The Dark-Hunters, The League, and Chronicles of Nick. Her Chronicles of Nick and Dark Hunter series are soon to be major media productions.