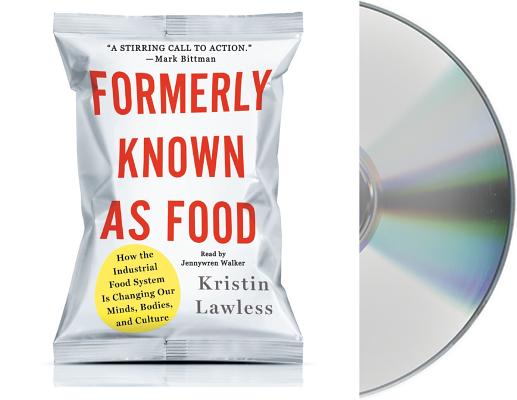 How the Industrial Food System Is Changing Our Minds, Bodies, and Culture

“Unless you make it yourself, you have no idea what you are eating and Kristin Lawless explains why. You better read this book before you put another bite of food in your or your kids mouths!” — Laurie David, Academy Award winning producer of An Inconvenient Truth and Fed Up

From the voice of a new generation of food activists, a passionate and deeply-researched call for a new food movement.

If you think buying organic from Whole Foods is protecting you, you're wrong. Our food—even what we're told is good for us—has changed for the worse in the past 100 years, its nutritional content deteriorating due to industrial farming and its composition altered due to the addition of thousands of chemicals from pesticides to packaging. We simply no longer know what we’re eating.

In Formerly Known as Food, Kristin Lawless argues that, because of the degradation of our diet, our bodies are literally changing from the inside out. The billion-dollar food industry is reshaping our food preferences, altering our brains, changing the composition of our microbiota, and even affecting the expression of our genes. Lawless chronicles how this is happening and what it means for our bodies, health, and survival.

An independent journalist and nutrition expert, Lawless is emerging as the voice of a new generation of food thinkers. After years of "eat this, not that" advice from doctors, journalists, and food faddists, she offers something completely different. Lawless presents a comprehensive explanation of the problem—going beyond nutrition to issues of food choice, class, race, and gender—and provides a sound and simple philosophy of eating, which she calls the "Whole Egg Theory."

Destined to set the debate over food politics for the next decade, Formerly Known as Food speaks to a new generation looking for a different conversation about the food on our plates.

KRISTIN LAWLESS (previously published as Kristin Wartman) is the author of Formerly Known As Food and an independent journalist focusing on the intersections of food, health, politics, and culture. Her work has appeared in The New York Times, The Atlantic, Newsweek, VICE, Huffington Post, and Civil Eats, as well as in academic journals, such as The Black Scholar, Critical Quarterly, and The New Labor Forum. Kristin is a Certified Nutrition Educator and works as a nutrition consultant with doctors in New York City. She lives in Brooklyn with her husband and son.
Loading...
or
Not Currently Available for Direct Purchase