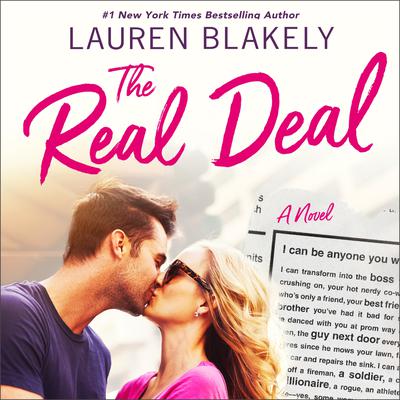 Get ready for your next favorite romantic comedy audiobook from Lauren Blakely, THE REAL DEAL!

April Hamilton wants you to know she hasn’t been on Craigslist since that time she sold her futon after college. She doesn’t even spend that much time online. And even if she did, she would not be looking up personal ads. But going home alone for her family's summer reunion is an invitation for every single relative to butt into her personal life. She simply can’t handle another blind date with the butcher, the baker or the candlestick maker from her hometown. So when she finds the Craigslist ad for a boyfriend-for-hire, she’s ready to pay to play.

Heading Home and Need a Buffer? I’m the REAL DEAL.

Theo Banks has been running from the past for years. He’s this close to finally settling all his debts, and one more job as a boyfriend-for-hire will do the trick. He’s no gigolo. Please. He’s something of an actor, and he knows how to slip into any role, including pretending to be April’s new beau -- the bad boy with the heart of gold.

Even if it means sleeping in close quarters in that tiny little bed in her parents’ inn. Even if it means spinning tales of a romance that starts to feel all too true. What neither one of them counts on is that amid the egg toss, the arm wrestling, and a fierce game of Lawn Twister that has them tangled up together, they might be feeling the real deal.

She only wanted to show her family once and for all that she had no need to settle down.

He didn’t expect to have the time of his life at her parent’s home.

They didn’t plan on loving every single second of the game.

But can a masterful game of pretend result in true love?

Praise for The Real Deal:

"I loved everything about these characters, from their sparkling banter to their electric attraction. Witty, clever, and swoony." -Amy E. Reichert, New York Times bestselling author of The Coincidence of Coconut Cake

"A hilarious, hot slow burn. The Real Deal is full of witty banter and characters you'll fall head over heels in love with." -Helena Hunting, New York Times bestselling author of Shacking Up