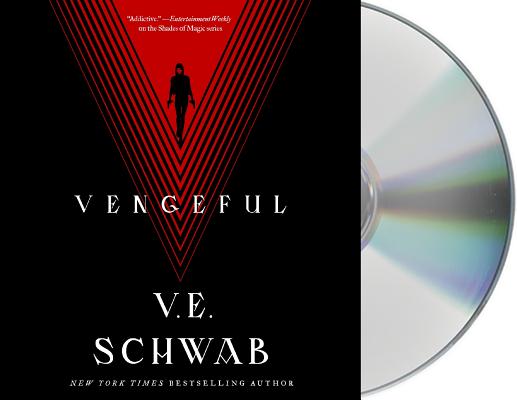 But Marcella Riggins needs no one. Flush from her brush with death, she’s finally gained the control she’s always sought—and will use her new-found power to bring the city of Merit to its knees. She’ll do whatever it takes, collecting her own sidekicks, and leveraging the two most infamous EOs, Victor Vale and Eli Ever, against each other once more.

With Marcella's rise, new enmities create opportunity--and the stage of Merit City will once again be set for a final, terrible reckoning.

"As epic and gripping as any classic comic...will resonate with superhero fans as well as readers who have never heard of Charles Xavier or Victor von Doom." —Publishers Weekly, starred review

"The writing and storycraft is Schwab's own superpower as this tale leaps of the page in all its dark, four-color comic-book glory." —Chuck Wendig, New York Times bestselling author of Aftermath

"Schwab's artful chronology-bending plotting rivals that of any Iain Banks novel, and her writing is a sly, cynical treat." —Financial Times (UK)

“V.E. Schwab demonstrates real literary super powers with Vicious –a dynamic and original twist on what it means to be a hero and a villain. A killer from page one. Highly recommended!” —Jonathan Maberry, New York Times bestselling author of Extinction Machine and Marvel Universe Vs The Avengers

"Vicious is dark and intricate and daring, twisting back and forth through time and morality and life and death until you can't turn the pages fast enough. I loved it." —Dan Wells

VICTORIA “V.E.” SCHWAB is the #1 New York Times bestselling author of more than a dozen books, including the acclaimed Shades of Magic series, Villains series, This Savage Song, and Our Dark Duet. Her work has received critical acclaim, been featured in the New York Times, Entertainment Weekly, Washington Post and more, translated into more than a dozen languages, and has been optioned for television and film. When she’s not haunting Paris streets or trudging up English hillsides, she lives in Edinburgh, Scotland and is usually tucked in the corner of a coffee shop, dreaming up monsters.
Loading...
or
Not Currently Available for Direct Purchase