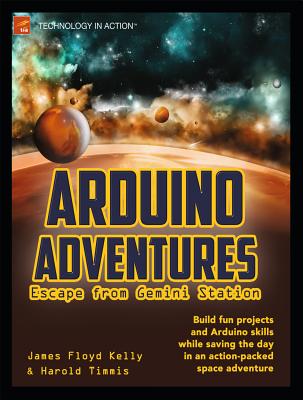 Arduino Adventures: Escape from Gemini Station provides a fun introduction to the Arduino microcontroller by putting you (the reader) into the action of a science fiction adventure story. You'll find yourself following along as Cade and Elle explore Gemini Station--an orbiting museum dedicated to preserving and sharing technology throughout the centuries.

Trouble ensues. The station is evacuated, including Cade and Elle's class that was visiting the station on a field trip. Cade and Elle don't make it aboard their shuttle and are trapped on the station along with a friendly artificial intelligence named Andrew who wants to help them get off the damaged station. Using some old hardware, a laptop, and some toolboxes full of electronics parts, you will follow along and build eight gizmos with Cade and Elle that will help them escape from Gemini Station.

The hardware is Arduino. Each new challenge opens a new area of Arduino and basic electronics knowledge. You'll be taken incrementally from a simple task such as turning on a light through to a complex combination of microcontroller, electronic components, and software programming. By the end of the book you'll be well on your way towards being able to create and implement any sort of electronically controlled device you can imagine, using the stunningly popular Arduino microcontroller.

James Floyd Kelly is a professional writer from Atlanta, Georgia. He has written numerous books on multiple subjects, including LEGO robotics, open source software, and building your own CNC machine as well as a 3D printer. He is the editor-in-chief of the number one MINDSTORMS NXT blog, The NXT Step (TheNXTStep.com), where he is joined by fellow NXT experts who share their knowledge and designs with other robot fans around the world.
Loading...
or support indie stores by buying on