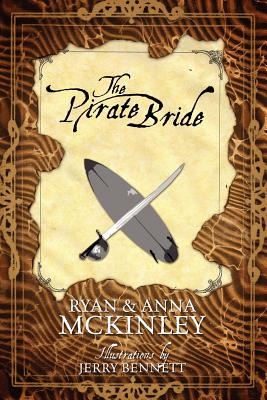 There is no escape from responsibility...even on vacation.
That doesn't stop 13 year-old Rachel from trying. A day of surfing, away from all five of her younger brothers, is meant to reward Rachel for all of her hard work at home. Instead, it turns into the greatest adventure of her life.
A wipeout catapults Rachel and her surfboard to a strange part of the ocean, far away from land and her family. Rescue arrives, or so Rachel thinks, in the form of an old sailing vessel. She quickly realizes that her heroes are lost pirates, some of which regard her as a threat, others which believe her to be their own rescuer-The Pirate Bride.
Voyage with Rachel as she applies her experiences with her rowdy brothers to the task of earning the pirates' trust, at the same realizing that even her unruly siblings aren't as bad as a ship full of lost pirates.
"The Pirate Bride" is an original story from the imagination of ten year-old Anna McKinley and brought to the page with help from her father, Ryan. Adding to the magic and wonder of the story are beautiful, pencil sketch illustrations by the artist Jerry Bennett.
Funny, moving and thoughtful, "The Pirate Bride" will enthrall readers of all ages as they discover, along with Rachel, that family can be the greatest treasure.