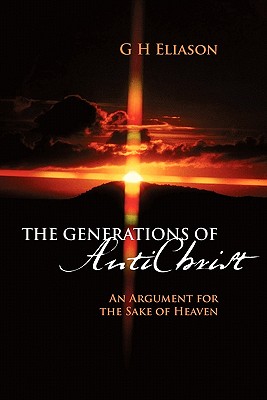 The Generations of Antichrist

An Argument for the Sake of Heaven

The Generations of Antichrist- An Argument for the Sake of Heaven
The body of this book was built as a reference often examining the same events from different and known perspectives of the persons involved. It is a good and sometimes groundbreaking historical reference for Jews, Christians, and Muslims detailing little known and for many unknown historical events. As it shows how these events and people have had massive impact on what we call Religion.
The appendices section entitled The Generations of Antichrist details the origin, rise, and many facets of the religion of the Whore of Babylon through history. The section goes on to the mechanics and facets of this religion until we get into real time, which is today. While the claim may seem large, through documentation and history not speculation and polemics, its provable nature is there for all to examine.
The book begins by giving a Scriptural basis for recognizing and evaluating the End of Days. How will the people of God know this? By what basis of signs given in Scripture can they determine that day?
The second section argues against radical changes sweeping across the faith today, which affect all of us. Many changes that have developed may begin to be spoken of as alternate Christian faiths. The developing doctrines and mysticisms are profoundly different from those spoken of by the early Apostles and the early histories. The sections that follow in a historically documented fashion support the arguments against change, the pre Christian through post Apostolic meaning of doctrines such as the Royal Adoption and the Royal Law.
The term being born again, is redefined, according to the existing Royal and Priestly adoption practices of the period and begins to show its true meaning.
Then the section introduces the term (Netzerim) Nazarene by tracing the origin of the King-High Priest to the time of David and then forward by family.
With this understood, the Priesthood of Melchizedek becomes open and transparent. The mechanics of the High Priest-King without lineage are opened and his position in the culture of the apostolic days defined.
The splitting off Judaism from the Religion of the Apostles is detailed and the man who caused it as recorded in Jewish and Christian histories.
The Appendices- The Generations of Antichrist documents the inception, growth and changes to a relatively unknown religion which has had profound effects on Judaism, Islam, and Christianity among many others over the last five hundred years.
Far from being hidden away, they are in plain sight not seen. The average grade school student learns and cites their account of creation as well as any of their greatest mystics. It is almost impossible today for any person throughout the world to go through an entire day without touching on some of their work.
With chapter titles ranging from -Repairing the Face of God-Shattered Jars and Heretic Sparks, Mystery is Her Appeal Disrobing the Whore, to Birth Pangs-The Armies of the North Osama bin Laden and other fun, and Bringing in Messiah- Riding the Hounds of Hell, the sections show not a hypothetical future but what is happening in real time, our time.
The appendices deal with the origins, history, and spread of this faith through careful documentation. It is not an expose but a study of religion and its effects on humankind, especially the common man, even noting some of the contributions made to the betterment of society.
Through the works of their own scholars, their goals are openly described as well as methods. In their own words their scholars detail the open mechanics of how a man may become god and what this will mean.