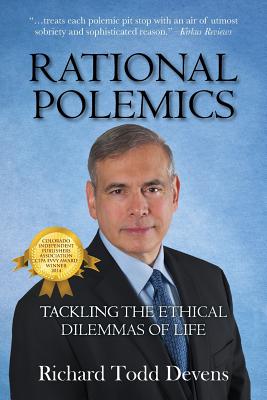 Tackling the Ethical Dilemmas of Life

Rational Polemics: Tackling the Ethical Dilemmas of Life There's a whole host of beliefs that most people simply repeat without question. They are chanted so often as to have nearly lost all meaning, and are rarely challenged. Rational Polemics dares to expose the contradictions that are rife in many of these blindly accepted beliefs. The book endeavors to question all things - to expose the folly and hypocrisy of universally held beliefs, including accepted religious dogma. It is geared toward open-minded readers with the courage to challenge convention and political correctness to consider alternative viewpoints. Rational Polemics by Richard Devens presents a provocative, controversial, outrageous challenge to the ideas and values that most of the world merely accepts "on faith - ideas that, upon closer examination, make little sense. "I wrote this book to encourage people not to blindly accept what others believe just because it is 'politically correct' to do so, or just because the majority does," Devens says. "I encourage people to think for themselves, and to live by the courage of their convictions. I encourage people to have the integrity of living by their own moral code if, by rational thought and reflection, they are convinced they are right." Told through personal anecdotes, with tongue-in-cheek humor and refreshing candor, Rational Polemics is a breath of fresh air to anyone ready to consider the true nature of evil, the hypocrisies inherent in religion and other prickly debates. Rational Polemics opens readers' minds to new ideas about deep and often difficult topics, sans the sugarcoating.

Richard Devens is a classically trained pianist, piano instructor, and writer. His article What Is Talent? appeared in the September-October 1992 issue of Piano Guild Notes. Earl Wild-The Romantic Master, a full-length interview of the late great piano virtuoso, was the cover feature of the November-December 1996 issue. Richard is co-author of the book Martial Arts for Kids (Weatherhill, 1997). He has also contributed articles to WUSHU KUNG FU, Official Karate, Karate/Kung-fu Illustrated, and BLACK BELT. He lives in New York.
or support indie stores by buying on
Copyright © 2020 American Booksellers Association