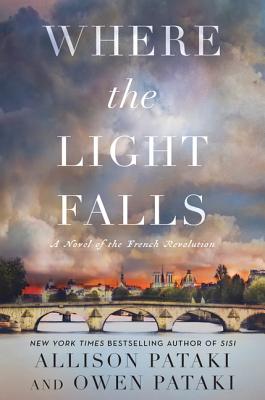 Where the Light Falls

A rich and sweeping novel of courage, duty, sacrifice, and love set during the French Revolution from New York Times bestselling author Allison Pataki and her brother Owen Pataki Three years after the storming of the Bastille, the streets of Paris are roiling with revolution. The citizens of France are enlivened by the ideals of liberty, equality, and fraternity. The monarchy of Louis XVI and Marie Antoinette has been dismantled--with the help of the guillotine--and a new nation is rising in its place. Jean-Luc, an idealistic young lawyer, moves his wife and their infant son from a comfortable life in Marseille to Paris, in the hopes of joining the cause. Andr , the son of a denounced nobleman, has evaded execution by joining the new French army. Sophie, a young aristocratic widow, embarks on her own fight for independence against her powerful, vindictive uncle. As chaos threatens to undo the progress of the Revolution and the demand for justice breeds instability and paranoia, the lives of these compatriots become inextricably linked. Jean-Luc, Andr , and Sophie find themselves in a world where survival seems increasingly less likely--for themselves and, indeed, for the nation. Featuring cameos from legendary figures such as Robespierre, Louis XVI, and Thomas-Alexandre Dumas, Where the Light Falls is an epic and engrossing novel, moving from the streets and courtrooms of Paris to Napoleon's epic march across the burning sands of Egypt. With vivid detail and imagery, the Patakis capture the hearts and minds of the citizens of France fighting for truth above all, and for their belief in a cause greater than themselves. Praise for Where the Light Falls "Compulsively readable . . . a compelling tale of love, betrayal, sacrifice, and bravery . . . a sweeping romantic novel that takes readers to the heart of Paris and to the center of all the action of the French Revolution."--Bustle "Succeeds in forcefully illustrating the lessons of the French Revolution for today's democratic movements."--Kirkus Reviews "Devotees of Alexandre Dumas and Victor Hugo will devour this tale of heroism, treachery, and adventure."--Library Journal "This is a story of the French Revolution that begins with your head in the slot watching how fast the blade of the guillotine is heading for your neck--and that's nothing compared to the pace and the drama of what follows."--Tom Wolfe

Allison Pataki is the New York Times bestselling author of The Traitor's Wife, The Accidental Empress, and Sisi. The daughter of former New York State governor George E. Pataki, she graduated cum laude from Yale University with a major in English. Her novels have been translated into more than a dozen languages. A former news writer and producer, Pataki has written for The New York Times, ABC News, The Huffington Post, USA Today, Fox News, and other outlets. She has appeared on Today, Fox & Friends, Good Day New York, Good Day Chicago, and MSNBC's Morning Joe. A member of the Historical Novel Society, she lives in Chicago with her husband. Owen Pataki graduated from Cornell University in 2010 with a degree in history. He served as a first lieutenant in the United States Army, with one deployment to Afghanistan. Following his service in the military, he attended film school in London. He now lives in New York, where he is working as a screenwriter and filmmaker. This is his first novel.
Loading...
or
Not Currently Available for Direct Purchase