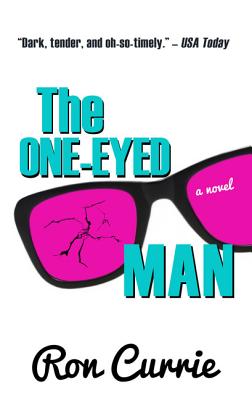 From the -startlingly talented- (New York Times) author of Everything Matters --a bold and timely novel about a grieving man dedicated to unmasking the role that lies and delusions play in our reactionary times
-Nobody writing today walks the knife edge of cynicism and sentiment more bravely, intelligently and confidently than Ron Currie. By turns hilarious and heartfelt, The One-Eyed Man is a revelation, a wonder.- --Richard Russo
-Dark, tender, and oh-so-timely.- - USA Today

Ron Currie's three previous works of fiction have dazzled readers and critics alike with their originality, audacity, and psychological insight. A writer of unique vision and huge imagination, Currie excels at creating complex, troubled, yet endearing characters, and his work has won comparison to everyone from Kurt Vonnegut to George Saunders.
K., the narrator of Currie's new novel, joins the ranks of other great American literary creations who show us something new about ourselves. Like Jack Gladney from White Noise, K. is possessed of a hyper-articulate exasperation with the world, and like Ignatius J. Reilly in A Confederacy of Dunces, he is a doomed truth teller whom everyone misunderstands. After his wife Sarah dies, K.becomes so wedded to the notion of clarity that he infuriates friends and strangers alike. When he intervenes in an armed robbery, K. finds himself both an inadvertent hero and the star of a new reality television program. Together with Claire, a grocery store clerk with a sharp tongue and a yen for celebrity, he travels the country, ruffling feathers and gaining fame at the intersection of American politics and entertainment. But soon he discovers that the world will fight viciously to preserve its delusions about itself.
How Currie's unconventional hero comes to find peace, to reenter the world, and to be touched again by emotion and empathy makes for a dramatic, utterly memorable story.

Ron Currie is the author of the novels Everything Matters! and Flimsy Little Plastic Miracles and the short story collection God Is Dead, which was the winner of the New York Public Library's Young Lions Award. Currie received the Addison M. Metcalf Award from the American Academy of Arts and Letters. His books have been translated into fifteen languages. He lives in Portland, Maine.
Loading...
or
Not Currently Available for Direct Purchase