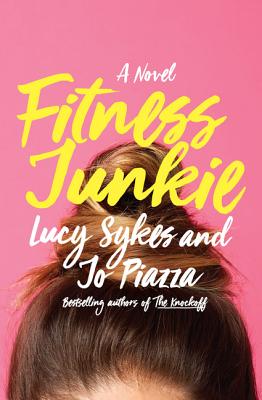 From the bestselling authors of The Knockoff, an outrageously funny novel about one woman's attempt--through clay diets, naked yoga, green juice, and cultish workout classes--to win back her career, save her best friend, and lose thirty pounds.
When Janey Sweet, CEO of a couture wedding dress company, is photographed in the front row of a fashion show eating a bruffin--the delicious lovechild of a brioche and a muffin--her best friend and business partner, Beau, gives her an ultimatum: Lose thirty pounds or lose your job. Sure, Janey has gained some weight since her divorce, and no, her beautifully cut trousers don't fit like they used to, so Janey throws herself headlong into the world of the fitness revolution, signing up for a shockingly expensive workout pass, baring it all for Free the Nipple yoga, sweating through boot camp classes run by Sri Lankan militants and spinning to the screams of a Lycra-clad instructor with rage issues. At a juice shop she meets Jacob, a cute young guy who takes her dumpster-diving outside Whole Foods on their first date. At a shaman's tea ceremony she meets Hugh, a silver fox who holds her hand through an ayahuasca hallucination And at a secret exercise studio Janey meets Sara Strong, the wildly popular workout guru whose special dance routine has starlets and wealthy women flocking to her for results that seem too good to be true. As Janey eschews delicious carbs, pays thousands of dollars to charlatans, and is harassed by her very own fitness bracelet, she can't help but wonder: Did she really need to lose weight in the first place? A hilarious send-up of the health and wellness industry, Fitness Junkie is a glorious romp through the absurd landscape of our weight-obsessed culture.

LUCY SYKES has worked in the fashion industry consulting for top designers Tommy Hilfiger and Ralph Lauren as a spokesperson for TJMaxx becoming the The First Maxxinista on a nationwide commercial. Lucy worked as on staff fashion editor at Town and Country and Allure magazine. For six years Lucy was the fashion director at Marie Claire magazine, and was most recently fashion director for Rent the Runway. She has appeared on fashion segments for Good Morning America and The Today Show. Her own children's clothing line, Lucy Sykes New York, was sold in more than a hundred department stores worldwide, including Saks Fifth Avenue, Barneys, Bergdorf Goodman, and Nordstrom. Together with her twin sister Plum, Lucy moved from London to New York City in 1996, where she now lives with her husband and two sons. JO PIAZZA is an award-winning reporter and editor who has written for the Wall Street Journal, The New York Times, the New York Daily News, New York Magazine, Glamour, Marie Claire, Elle and Salon. She has appeared on CNN, NPR, Fox News, the BBC and MSNBC. She received a master's degree in Journalism from Columbia, a master's degree in Religious Studies from NYU, and a bachelor's degree in Economics from the University of Pennsylvania. She is also the author of the critically acclaimed If Nuns Ruled the World, Celebrity Inc: How Famous People Make Money, and How to Be Married: What I Learned from Real Women on Five Continents About Surviving My First (Really Hard) Year of Marriage. She currently lives in San Francisco with her husband and their giant dog.
Loading...
or
Not Currently Available for Direct Purchase