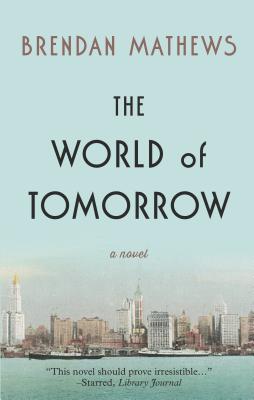 The World of Tomorrow

Three brothers caught up in a whirlwind week of love, blackmail, and betrayal culminating in an assassination plot, set in prewar New York
June 1939. Francis Dempsey and his shell-shocked brother Michael are on an ocean liner from Ireland bound for their brother Martin's home in New York City, having stolen a small fortune from the IRA. During the week that follows, the lives of these three brothers collide spectacularly with big-band jazz musicians, a talented but fragile heiress, a Jewish street photographer facing a return to Nazi-occupied Prague, a vengeful mob boss, and the ghosts of their own family's revolutionary past.
When Tom Cronin, an erstwhile assassin forced into one last job, tracks the brothers down, their lives begin to fracture. Francis must surrender to blackmail, or have his family suffer fatal consequences. Michael, wandering alone, turns to Lilly Bloch, a heartsick artist, to recover his lost memory. And Martin and his wife, Rosemary, try to salvage their marriage and, ultimately, the lives of the other Dempseys.
From the smoky jazz joints of Harlem to the Plaza Hotel, from the garrets of artists in the Bowery to the shadowy warehouses of mobsters in Hell's Kitchen, Brendan Mathews brings prewar New York to vivid, pulsing life, while the sweeping and intricate storytelling of this remarkable debut reveals an America that blithely hoped it could avoid another catastrophic war and focus instead on the promise of the World's Fair: a peaceful, prosperous "World of Tomorrow."

Brendan Mathews writes fiction and teaches at Bard College at Simon's Rock. A 2011 finalist for the Flannery O'Connor Short Fiction Prize, he has published in Best American Short Stories, Cincinnati Review, Glimmer Train, Virginia Quarterly Review, and others. He lives with his family in Lenox, Massachusetts.
Loading...
or
Not Currently Available for Direct Purchase