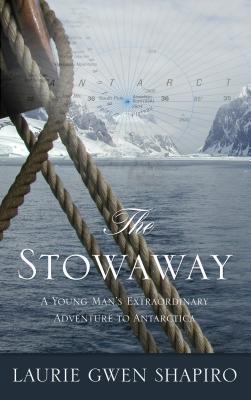 “The story of Billy Gawronski, the young man who repeatedly tried to join Richard Byrd's Antarctic expedition, reads like an adventure novel. The reality of his life is beyond the realm of the wildest imagination. Shapiro brings this resilient and resourceful man to life against the changing world of the Roaring Twenties, and his story perfectly reflects a world undergoing vast change. Combining narrative, science, and portraits of outsized personalities, Shapiro treats the reader to a story that is not only relevant but a total joy.”
— Bill Cusumano, Square Books, Oxford, MS
View the List

“Usually I shy away from nonfiction, but I was riveted by this tenacious young stowaway’s journey to Antarctica. Shapiro wrangles a large cast of characters, and the breadth of her research is astounding. The Stowaway is accessible and intellectually stimulating; I learned so much.”
— Emily Perper, Curious Iguana, Frederick, MD
View the List

The spectacular, true story of a scrappy teenager from New York's Lower East Side who stowed away on the Roaring Twenties' most remarkable feat of science and daring: an expedition to Antarctica. It was 1928: a time of illicit booze, of Gatsby and Babe Ruth, of freewheeling fun. The Great War was over and American optimism was higher than the stock market. What better moment to launch an expedition to Antarctica, the planet's final frontier? This was the moon landing before the 1960s. Everyone wanted to join the adventure. Rockefellers and Vanderbilts begged to be taken along as mess boys, and newspapers across the globe covered the planning's every stage. The night before the expedition's flagship launched, Billy Gawronski--a skinny, first generation New York City high schooler desperate to escape a dreary future in the family upholstery business--jumped into the Hudson River and snuck aboard. Could he get away with it? From the grimy streets of New York's Lower East Side to the rowdy dance halls of sultry Francophone Tahiti, all the way to Antarctica's blinding white and deadly freeze, Laurie Gwen Shapiro's The Stowaway takes you on the unforgettable voyage of a gutsy young stowaway who became an international celebrity, a mascot for an up-by-your bootstraps age.
or
Not Currently Available for Direct Purchase
Copyright © 2020 American Booksellers Association