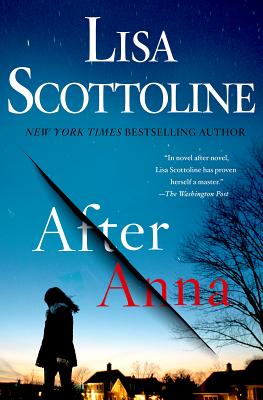 Dr. Noah Alderman, a widower and single father, has remarried a wonderful woman, Maggie Ippolitti, and for the first time in a long time, he and his young son are happy. Despite her longing for the daughter she hasn't seen since she was a baby, Maggie is happy too, and she's even more overjoyed when she unexpectedly gets another chance to be a mother to the child she thought she'd lost forever, her only daughter Anna.

Riveting and disquieting, After Anna is a groundbreaking domestic thriller, as well as a novel of emotional justice and legal intrigue. And New York Times bestselling author Lisa Scottoline will keep readers on their toes until the final shocking page

"Scottoline keeps the pace relentless as she drops a looming threat into the heart of an idyllic suburban community, causing readers to hold their breath in anticipation." --Booklist on One Perfect Lie

"Readers can be assured that the author nails the high school milieu, from athletic rivalries to sexting...they're in for one thrilling ride." --Kirkus on One Perfect Lie

"Entertaining...This fast-paced read culminates in a daring chase that would play well on the big screen." --Publishers Weekly

LISA SCOTTOLINE is the New York Times bestselling and Edgar Award-winning author of the Rosato & DiNunzio series, as well as One Perfect Lie, Most Wanted, and many others. She has 30 million copies of her books in print in the United States, she has been published in thirty-five countries, and her thrillers have been optioned for television and film. Lisa also writes a weekly column with her daughter, Francesca Serritella, for The Philadelphia Inquirer, and those critically acclaimed stories have been adapted into a series of memoirs, the first of which is entitled Why My Third Husband Will Be a Dog. She lives in the Philadelphia area.
Loading...
or
Not Currently Available for Direct Purchase