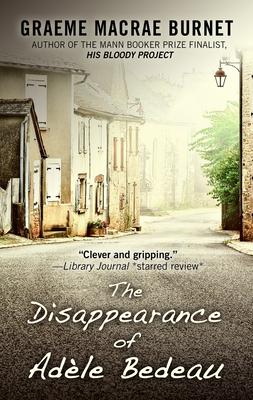 The Disappearance of Adèle Bedeau

A Historical Thriller by Raymond Brunet

Socially awkward and perpetually ill at ease, Manfred Baumann spends his evenings drinking and surreptitiously observing Ad le Bedeau, the sullen but alluring waitress at a drab bistro in the small French town of Saint-Louis. One day, she vanishes into thin air. Georges Gorski, a detective haunted by his failure to solve one of his first murder cases, is called in to investigate. He sets his sights on Manfred.

Graeme Macrae Burnet has established a reputation for smart and literary mystery writing with his highly praised novel, His Bloody Project, which was named a finalist for the Man Booker Award in 2016. He was born and brought up in Kilmarnock and has lived in Prague, Bordeaux, Porto, and London. He now lives in Glasgow, Scotland.
Loading...
or
Not Currently Available for Direct Purchase