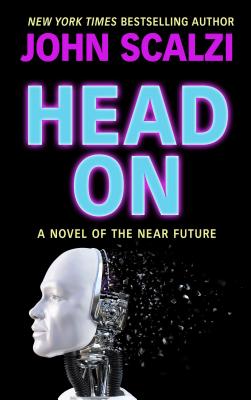 A Novel of the Near Future

Hilketa is a violent pastime where players attack opponents with swords and hammers and score by carrying their heads through goalposts. The players are robot-like "threeps" controlled by people with Haden's Syndrome. No one gets hurt, but the brutality is real and the crowds love it. Until a star athlete drops dead on the field. Accident, or murder? FBI agents and Haden-related crime investigators Chris Shane and Leslie Vann investigate.

JOHN SCALZI is one of the most popular and acclaimed SF authors to emerge in the last decade. His massively successful debut Old Man's War won him science fiction's John W. Campbell Award for Best New Writer. His New York Times bestsellers include The Last Colony, Fuzzy Nation, and Redshirts; which won 2013's Hugo Award for Best Novel. Material from his widely read blog, Whatever, has also earned him two other Hugo Awards. Scalzi also serves as critic-at-large for LA Times.He lives in Ohio with his wife and daughter.
Loading...
or
Not Currently Available for Direct Purchase