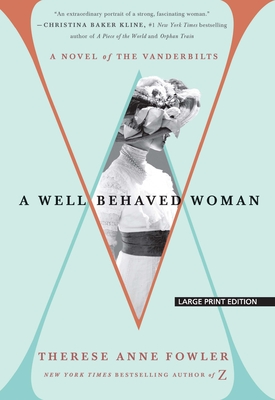 A Novel of the Vanderbilts

“In her lifetime, Alva Smith Vanderbilt goes from being a Have to a Have-Not to a Have-It-All. Not content to just build spectacular mansions and host fabulous high-society balls, she uses her status and immense wealth to help the poverty-stricken, promote racial equality, and advocate for women’s rights in the courts and voting booths. As she did in Z, Therese Anne Fowler digs beyond the sensational and scandalous newspaper headlines and brings depth to her protagonist to show us a life well-lived.”
— Nancy Baenen, Arcadia Books, Spring Green, WI
View the List

The riveting novel of iron-willed Alva Vanderbilt and her illustrious family as they rule Gilded-Age New York, written by Therese Anne Fowler, a New York Times bestselling author of Z: A Novel of Zelda Fitzgerald.

Alva Smith, her southern family destitute after the Civil War, married into one of America�s great Gilded Age dynasties: the newly wealthy but socially shunned Vanderbilts. Ignored by New York�s old-money circles and determined to win respect, she designed and built nine mansions, hosted grand balls, and arranged for her daughter to marry a duke. But Alva also defied convention for women of her time, asserting power within her marriage and becoming a leader in the women's suffrage movement.

With a nod to Jane Austen and Edith Wharton, in A Well-Behaved Woman Therese Anne Fowler paints a glittering world of enormous wealth contrasted against desperate poverty, of social ambition and social scorn, of friendship and betrayal, and an unforgettable story of a remarkable woman. Meet Alva Smith Vanderbilt Belmont, living proof that history is made by those who know the rules?and how to break them.

THERESE ANNE FOWLER is the author of the New York Times bestselling novel Z: A Novel of Zelda Fitzgerald. Raised in the Midwest, she moved to North Carolina in 1995. She holds a BA in sociology/cultural anthropology and an MFA in creative writing from North Carolina State University.
Loading...
or
Not Currently Available for Direct Purchase