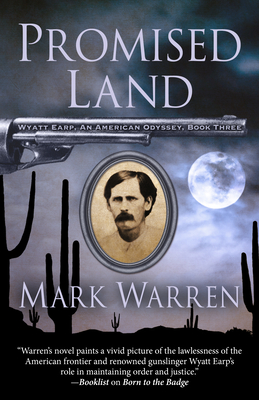 In Tombstone, Arizona Territory, despite a silver strike promising entrepreneurial opportunities, Wyatt Earp returns to law enforcement, posing a new threat to the Cow-boy rustlers running rampant on both sides of the U.S.-Mexican border. The Earp brothers make as many enemies as they do allies in a deeply divided community. Aspiring to be county sheriff, Wyatt bargains with outlaw informants in his pursuit of three wanted men. When the deal unravels, the Cow-boy traitors fear retribution from their own, planting the seed for the thirty seconds that will ensure Wyatt Earp his place in history-the gunfight that erupts behind the O.K. Corral. What follows-assassination and swift justice-guarantees that Wyatt Earp's name will forever serve as one standard within the debate of law versus order.

Sticking close to the history, author Mark Warren’s Promised Land (the final installment of the historical fiction trilogy Wyatt Earp: An American Odyssey) gives us the Tombstone story from Wyatt’s point of view—a challenge, as the laconic Wyatt was famous for not saying much and keeping a poker face that concealed whatever he might be thinking. And respecting the privacy of the man, Warren rarely delivers the kind of long inner monologue than can reveal character.
Yet there are touches of poetry in the writing, as Warren delivers his trademark descriptions of the physical environment—the colors of a desert sunset or the scent of sage blown by a desert wind, which give a visceral sense to the man and his world, a place filled with physical sensation rather than emotional sensibility.
In the end, Promised Land is a simple story of a simple man whose goals are finally achieved, though in ways he didn’t plan and would not have wanted.
Wyatt did make a name for himself that would go down in legend and he made some money along the way, but in Tombstone he lost a brother and the life he hoped to find. His so-called Vendetta Ride may have proved his loyalty and provided the revenge in this Odyssey, but Wyatt Earp’s promised land remained ever elusive, like the man himself. - Review by Victoria Wilcox, author of award-winning trilogy "The Saga of Doc Holliday"

“This is the third Warren novel on Wyatt Earp. It captures the turbulent Tombstone years. At first blush, this reviewer seldom gives rapt attention to yet another Earp rendering. After hundreds of books and articles about the West’s most dissected lawman, what else could be new?

Surprise! ‘Promised Land’ and its two precedent books bring a delightful new flavor to a well-chewed subject. Warren’s novel weaves all the necessary facts with fictionalized examinations of the immortalized characters that dotted the Tombstone landscape nearly 140 years ago.

Wyatt emerges from the card-board cutout image that is too often portrayed.

In “Promised Land,” Earp and the surrounding cast spring to life with a well-written text that allows for a humanization of the West’s most famous confrontation. The conversations meld and ring true, as if Warren was there with pen in hand. The dialogue and personal emotions of the Tombstone cast are splendidly done, leaving this reviewer with the thought that if it
ain’t true, it oughta be.

‘Promised Land’ is a back-slapping, hat-tipping welcome addition to the endless attraction of Wyatt Earp and the OK Corral. It is the best Earp book in years.”
~ Scott Dyke, Western Historian, Book Reviewer for Green Valley News and Author of the Column “Meandering the Mesquite”