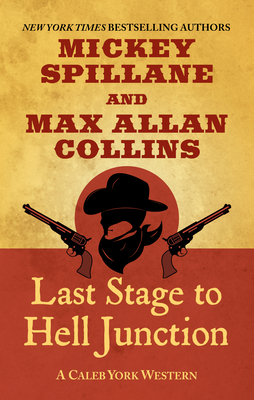 Welcome to Hell
In a bloody attack, ruthless outlaws hijack the morning stage from Trinidad, New Mexico. Not for gold or money, but for Denver banker Raymond Parker. Even more valuable to Sheriff Caleb York are the money man's fellow passengers: York's ex-flame, ranch owner Willa Cullen, and Rita Filley, the sensual owner of the Victory Saloon.

Holding their captives at a hotel in the ghost town known as Hell Junction, the Hargrave gang demands a high ransom. Caleb must find a way to infiltrate the gang and rescue the hostages. Because Caleb York knows when you're in Hell, justice takes no prisoners . . .

Mickey Spillane is the legendary crime writer credited with igniting the explosion of paperback publishing after World War II through the unprecedented success of his Mike Hammer novels. Spillane's novels sold tens of millions of copies. I, The Jury went through more than 60 paperback printings in 1947 alone. In 1995, he was named a Grand Master by the Mystery Writers of America. Before his death at the age of 88 in 2006, Spillane chose long-time friend Max Allan Collins to complete his unfinished works and act as his literary executor. Max Allan Collins is the New York Times bestselling, award-winning author of Road to Perdition, the graphic novel that inspired the Oscar-winning movie starring Paul Newman and Tom Hanks. He has been named a Grand Master by the Mystery Writers of America. Also a filmmaker, Collins created the documentary Mike Hammer's Mickey Spillane. He lives in Iowa. For more information about the Caleb York westerns by Mickey Spillane and Max Allan Collins, visit www.maxallancollins.com.
Loading...
or
Not Currently Available for Direct Purchase