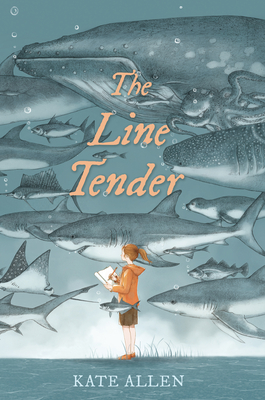 “The Line Tender is the beautifully written story of Lucy, an almost-13-year-old girl in the oceanside town of Rockport, Massachusetts. Her mother, a shark scientist, died suddenly when Lucy was only eight, and she has found solace within a circle of caring friends and her father, who remains depressed since his wife’s death. I absolutely adored the characters in this book, and all the scientific information about sharks.”
— Vicky Titcomb, Titcomb's Bookshop, East Sandwich, MA
View the List

Funny, poignant, and deeply moving, The Line Tender is a story of nature's enduring mystery and a girl determined to find meaning and connection within it. Wherever the sharks led, Lucy Everhart's marine-biologist mother was sure to follow. In fact, she was on a boat far off the coast of Massachusetts, collecting shark data when she died suddenly. Lucy was seven. Since then Lucy and her father have kept their heads above water--thanks in large part to a few close friends and neighbors. But June of her twelfth summer brings more than the end of school and a heat wave to sleepy Rockport. On one steamy day, the tide brings a great white--and then another tragedy, cutting short a friendship everyone insists was "meaningful" but no one can tell Lucy what it all meant. To survive the fresh wave of grief, Lucy must grab the line that connects her depressed father, a stubborn fisherman, and a curious old widower to her mother's unfinished research on the Great White's return to Cape Cod. If Lucy can find a way to help this unlikely quartet follow the sharks her mother loved, she'll finally be able to look beyond what she's lost and toward what's left to be discovered. ★"Confidently voiced."--Kirkus Reviews, starred
★"Richly layered."--Publishers Weekly, starred
★"A hopeful path forward."--Booklist, starred
★"Life-affirming."--BCCB, starred
★"Big-hearted." --Bookpage, starred
★"Will appeal to just about everyone." - SLC, starred
★"Exquisitely, beautifully real."--Shelf Awareness, starred.

Kate Allen grew up in Massachusetts and lives in Minneapolis, MN, with her family. The Line Tender is her first novel. Visit her online at www.kateallenbooks.com
Loading...
or
Not Currently Available for Direct Purchase