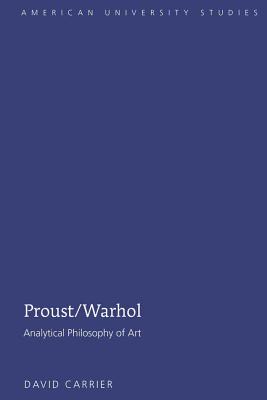 Two of the most important modernist artists, Marcel Proust and Andy Warhol, also developed aesthetic theories. Proust presents imaginary artists - a composer, a painter, and a novelist. Warhol made paintings and sculptures; created art history writing, fiction, and films; and sponsored a rock group. Warhol most likely never read Proust, but because their ways of thinking contrast dramatically, much can be learned about both men's art by comparing: the imaginary painting described by Proust to Warhol's Marilyn Diptych; the ways that Proust and Warhol understand art-making; how Proust and Warhol define art; and the ways that Elstir's studio differs from Warhol's factory. Also discussed is the relationship of their homosexuality to their art. Proust/Warhol: Analytical Philosophy of Art employs three key intellectual tools: the aesthetic theory of Arthur Danto, the account of Proust by Joshua Landy, and the analysis of the art of living by Alexander Nehamas. Proust/Warhol concludes with a discussion of an issue of particular importance for Warhol, the relationship between art and fashion.

The Author: David Carrier received his Ph.D. from Columbia University. Since 2001 he has been Champney Family Professor, a post divided between Case Western Reserve University and the Cleveland Institute of Art. He has been a Getty Scholar, a Clark Fellow, and a Senior Fellow at the National Humanities Center. He will be a Fulbright-Luce lecturer in Beijing (Spring 2009). Carrier's art criticism has been published in Artforum, ArtUS, The Burlington Magazine, and other journals. His books include: High Art: Charles Baudelaire and the Origins of Modernist Painting (1996); The Aesthetics of Comics (2000); Rosalind Krauss and American Philosophical Art Criticism: From Formalism to beyond Postmodernism (2002); Writing About Visual Art (2003); Museum Skepticism: A History of the Display of Art in Public Galleries (2006); and A World Art History (forthcoming).
or
Not Currently Available for Direct Purchase
Copyright © 2020 American Booksellers Association