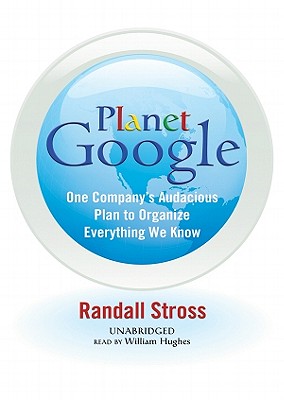 One Company's Audacious Plan to Organize Everything We Know

After one of the most successful IPOs in history, Google set forth on an incredible, audacious new strategy for its future--a vision so bold, large-scale, and controversial, that the company has worked very hard to keep it totally under wraps. Neither The Search nor The Google Story, both successful books about the company, included any information about this new vision the business has for itself. The business world and the large community of those interested in web issues have been desperately trying to understand what Google is up to, because they know that Google is the arbiter of the future of the web, and really of computing altogether. Randy Stross has achieved unprecedented access to the Google headquarters and top management, including notoriously close-to-the-vest CEO Eric Schmidt, as well as to a wide range sources who have worked with Google or monitored its activities. In this book he will reveal for the first time the astonishing scale and scope of what Google is setting out to accomplish, including such potentially disruptive initiatives as free downloadable software, which could put providers like Microsoft out of business, and Google Earth satellite technology, which is rapidly mapping the entire surface of the Earth in high-powered detail. Stross explores the profound implications of these plans, not only for the business world, but for our culture at large.
or
Not Currently Available for Direct Purchase
Copyright © 2020 American Booksellers Association