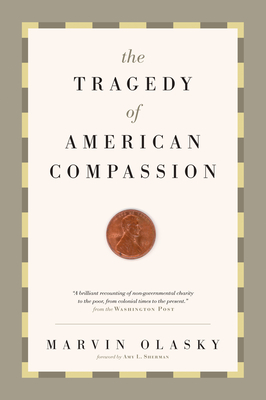 The Tragedy of American Compassion

William J. Bennett once called it the most important book on welfare and social policy in a decade. Period. It influenced the Clinton Administration's welfare reform and deeply affected then-Governor George W. Bush's policies in Texas. But with the war on terror, the ideas in The Tragedy of American Compassion have taken a backseat.

Because it is based on historical successes and ancient wisdom, however, Tragedy is as timeless as ever. Marvin Olasky's groundbreaking book turns on its head both conventional history and rhetoric, showing that America's volunteer poverty-fighters were often more effective than our recent professionalized corps. His research also reveals that the real problem of modern welfare is not its cost but its stinginess in offering the true necessities: challenging, personal, and spiritual aid rather than entitlement and bureaucracy. So this book is now being reissued with new frontmatter to prepare a new generation of Americans to offer help that actually helps and to effectively confront once again the establishment that still impoverishes the impoverished. Foreword by Amy Sherman.

Marvin Olasky (PhD, University of Michigan) is a senior fellow of the Discovery Institute and the author of 28 books, including The Tragedy of American Compassion and Lament for a Father. From 1983 through 2021 he was a professor at the University of Texas at Austin and the editor in chief of World. He and his wife, Susan, have four sons.
Loading...
or support indie stores by buying on