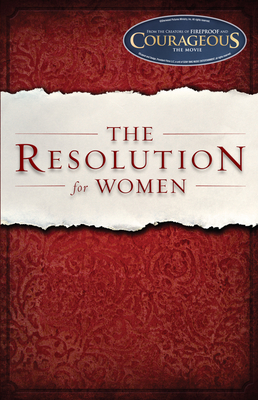 The Resolution for Women

Written in partnership with Sherwood Pictures' upcoming film, COURAGEOUS, in The Resolution for Women, popular speaker and author Priscilla Shirer challenges all women to be intentional about embracing and thriving in God’s beautiful and eternal calling on their lives.

Like the men in the movie who resolve to fully accept their responsibilities before God, Shirer explains how today's women can and should live out their own resolution. It is "a defining banner that hangs over your life, written in the ink of your own choices." A woman's banner should be an accurate reflection of who she desires to be-someone completely Christ-centered who blesses and changes things in her world for the better.

The Resolution for Women inspires women with intentional, spirit-filled living from three unique angles. Section one, entitled, "This Is Who I Am," helps a woman define herself as "authentically me, purposefully feminine, surprisingly satisfied, and faithfully His." Section two, "This Is What I Have," invites her to value "my best, my blessing, my honor, and my heart." And Section three, "This Is What Matters To Me," focuses on joyfully honoring God as a wife, mother, and family member while resolving to live with the grace that leaves a godly legacy. The Resolution for Women is designed to inspire a revolution.

Priscilla Shirer is a Bible teacher and conference speaker with a Master’s degree in Biblical Studies from Dallas Theological Seminary. Also a popular author, her books include the New York Times Best-Seller, The Resolution for Women, One in a Million, and Life Interrupted. She is also the lead character in the War Room movie. Priscilla is married to Jerry with whom she founded Going Beyond Ministries. They have three sons and live in Dallas, Texas.