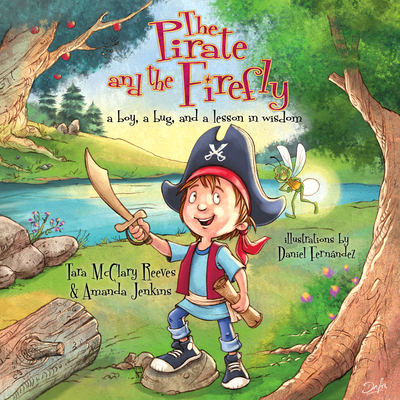 The Pirate and the Firefly (Hardcover)

A Boy, a Bug, and a Lesson in Wisdom (Firefly Chronicles)

1 Oh, the joys of those who do not
follow the advice of the wicked,
or stand around with sinners,
or join in with mockers.
2 But they delight in the law of the Lord,
meditating on it day and night.
3 They are like trees planted along the riverbank,
bearing fruit in each season.
Their leaves never wither, and they prosper in all they do.

Oliver loves pretending to be a pirate, but learns that blindly following others doesn't leave him with a good feeling inside.

In this Scripture adventure, kids join Oliver as he rights the wrongs done by his so-called Pirate friends.

Through it all, Captain Oliver learns that following God's way is the true way to wisdom!

The second book in the Firefly Chronicle series brings entire sections of Scripture to life via imaginative, fantastical stories that use a passage from Psalms to help children understand and applly biblical truths to their lives. Each book in the series will depict Oliver wearing a different costume as he imagines and adventures his way through God's Word with the help of Phineas, the firefly. The series will address the felt needs of children ages 4 to 8 including courage, confidence, friendship and more with biblical truths about God.

Amanda Jenkins is passionate about communicating biblical truths to kids in a way they can understand and connect with. Amanda lives just outside of Chicago with her husband, Dallas, and their four young children. She is also the daughter-in-law of Jerry B. Jenkins, author of the best-selling Left Behind series.

Tara McClary Reeves will tell you the two greatest decisions in her life were declaring “I do” to Jesus Christ and, 23 years later, announcing “I do” to Lee Reeves at her South Carolina wedding. Tara is the author of Don’t Tell That to Beasley (WaterBrook Press 2005) and one of her joys and privileges as a parent is daily pointing her children to Jesus. She is thrilled Amanda Jenkins agreed to join her on The Knight and the Firefly and is prayerful their collaboration will equip parents and children to focus and depend upon the Lord. Tara and her husband, Lee, live in Davidson, North Carolina with their 12-year-old twins, Caroline and Daniel, and 9-month-old "bonus baby," Harrison.

Daniel Fernández was born in Santiago de Chile, and has lived in Germany since the age of five. He has worked as Creative Director, Art Director, illustrator, designer, Head of Art and worked for many advertising agencies and Publishing Editorials in Chile, The United States, Germany, Denmark and Italy. He has published over 30 titles. He has won awards for creativity and art direction: Cannes, New york Festivals, Big Amauta, International Echo Awards Grand prix, Big Idea Ogilvy, Gráfica el Mercurio, Effie Awards, Fiap.
or
Not Currently Available for Direct Purchase
Copyright © 2020 American Booksellers Association