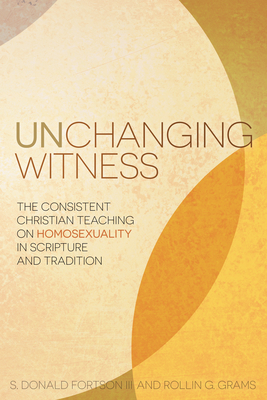 The Consistent Christian Teaching on Homosexuality in Scripture and Tradition

The church is going through a time of severe fracture over the issue of homosexuality. This book addresses the arguments from the gay Christian movement and revisionist theologians and exegetes on a single point: Can they withstand the evidence of the primary sources?

In Unchanging Witness, Donald Fortson and Rollin Grams articulate the consistent orthodox view on homosexuality by presenting primary sources throughout Christian history and by interpreting the biblical texts in their cultural contexts.  The first part of the book examines church history from the patristic period to the present day, and the second part engages biblical texts in light of Ancient Near Eastern, Jewish, Greek, and Roman primary sources.

Throughout, the authors survey the conflicting and changing arguments of revisionist readings and contend that, in light of the overwhelming evidence of the relevant texts, the real issue is not one of interpretation but of biblical authority and Christian orthodoxy.