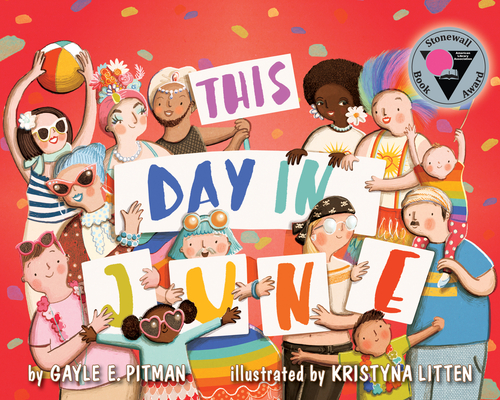 This Day in June

"The pride primer." --The New Yorker
Top 11 Most Challenged Books by American Library Association
Winner, Stonewall Book Award--Mike Morgan and Larry Romans Children's & Young Adult Literature Award This day in June.... Parade starts soon.... Rainbow arches.... Joyful marches In a wildly whimsical, validating, and exuberant reflection of the LGBTQ+ community, This Day In June welcomes readers to experience a pride celebration and share in a day when we are all united. Also included is a Note to Parents and Other Caregivers with information on how to talk to children about sexual orientation and gender identity in age-appropriate ways as well as a Reading Guide chock-full of facts about LGBTQ+ history and culture. This Day in June is an excellent tool for teaching respect, acceptance, and understanding of lesbian, gay, bisexual, and transgender people. A Top Ten Title, American Library Association Rainbow List
Winner, Notable Books for a Global Society Awards
Named one of the most important books of the last decade by The Advocate's "40 Under 40" list.

Gayle E. Pitman, PhD, is a professor of psychology and women's studies at Sacramento City College. Her teaching and writing focuses on gender and sexual orientation, and she has worked extensively with the lesbian, gay, bisexual, and transgender (LGBTQ+) community. She is the author of This Day in June, When You Look Out the Window, and Sewing the Rainbow. She lives in California. Visit her at www.gaylepitman.com and follow her on Facebook: @GaylePitmanAuthor, Twitter: @GaylePitman, and Instagram: @GaylePitman. Kristyna Litten studied illustration at Edinburgh College of Art. Kristyna is influenced by books and animation from Eastern Europe which has led to a fascination for illustrating and writing her own picture books. She prefers to draw quickly to give an energetic line quality to her illustrations, often adding color and other hand-produced textures digitally. She lives in England. Follow Kristyna on Facebook: @KristynaLitten and Twitter: @KristynaLitten.
Loading...
or
Not Currently Available for Direct Purchase