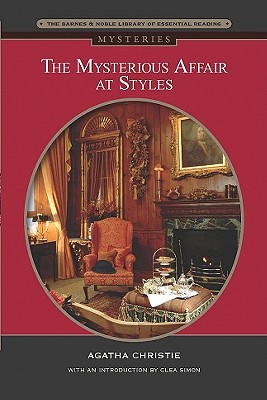 A wealthy woman is poisoned at an English country manor and the world of detective fiction is changed forever. With The Mysterious Affair at Styles, Agatha Christie launched herself, and her beloved Belgian detective Hercule Poirot, into popular culture history. When Captain Arthur Hastings runs into an old friend, John Cavendish, and is invited to the family estate at Styles, he has a "premonition of approaching evil." Outside, the Great War is still raging, and England is in upheaval. Cavendish's widowed stepmother has brought the turmoil home by marrying a sinister-looking younger man, and when she is killed, presumably poisoned with strychnine, he becomes the first and most obvious suspect. But other family members may also have had motives for murder. Luckily, one of the Belgian refugees from the German occupation staying at Styles is a retired police detective: Hercule Poirot is on the case.

Agatha Christie is remembered today as the queen of crime fiction, the author of one hundred eighty-four works of detective fiction and thirteen plays. Born on Sept. 15, 1890 to an aristocratic American father and his English wife, the pretty socialite became a Volunteer Aid Detachment nurse. By 1956, the author became a Commander of the British Empire and, in 1971 she was named a Dame of the British Empire.
Loading...
or
Not Currently Available for Direct Purchase