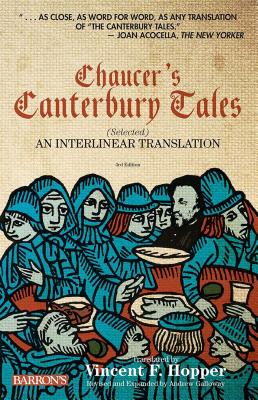 "Hopper's rendering is as close, as word for word, as any translation of 'The Canterbury Tales'... " —The New Yorker

Geoffrey Chaucer (c.1340–1400), penned his masterpiece in a vernacular that was the standard dialect in the southeast of England during his lifetime—a language of rich vitality, but also very different from the English we speak today. This useful volume presents readers with the vigor, liveliness, and humor of Chaucer’s original Middle English poetry, interspersed line-by-line with Professor Vincent Hopper’s modern, graceful, and easy-to-understand translation.This new edition, updated with an enlightening new introduction by Andrew Galloway, also features four newly translated narratives.

The Canterbury Tales is among the earliest of the great narrative poems written in the English language. is a set of stories that a diverse group of travelers tell to one another at the end of each day. They had set off by foot on a religious pilgrimage from the Tabard Inn in London to the shrine of St. Thomas Ã Becket in England’s cathedral town of Canterbury. This volume opens with Chaucer’s own famous Prologue, and then presents the best among those many tales, which demonstrate Chaucer’s skill in portraying a wide range of very different personalities. For instance, we meet the religiously pious but haughty Prioress, the comically bawdy Miller, and the genially earthy Wife of Bath, among many others. Through it all, we are treated to Chaucer’s own voice, which is worldly wise, often ironic, sometimes self-deprecating, and always good-natured. Here in a newly updated edition is an attractive and approachable textbook for students of English literature. It’s also a richly entertaining volume for the enlightened general reader This new edition gives today’s readers an awareness as never before that The Canterbury Tales is one of the great masterpieces of world literature.