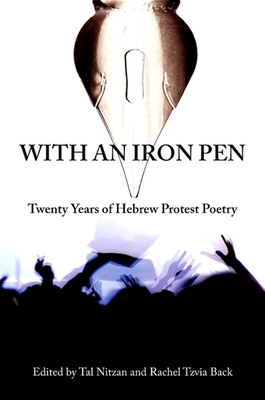 With an Iron Pen

The eighty-eight poems in With an Iron Pen, all originally written in Hebrew, offer a collective protest to the continuing Israeli occupation of the West Bank and Palestinian territories--"the sin of Judah," which is written "with an iron pen, engraved with the point of a diamond on the tablet of their hearts" (Jeremiah 17:1). Including such preeminent voices as Yehuda Amichai, Aharon Shabtai, Dahlia Ravikovitch, Meir Wieseltier, and Natan Zach, the forty-two poets in this groundbreaking anthology represent the full range of contemporary Hebrew poetry. Together, they turn an unforgiving gaze on the occupation, speaking with rage, shame, sorrow, and despair at the continuing violence that has defined the lives of Palestinians and Israelis over the years and the hopelessness that has permeated both societies. The result is a collection of poems that are as important for their compelling poetic beauty as for their significant political accomplishment. The original Hebrew edition, published in 2005, received accolades in the Israeli press for its comprehensive collection of dissenting voices and for its daring and beautiful poetry. With an Iron Pen is a must read for all who seek a better understanding of the occupation and the wider conflict in the Middle East.

Tal Nitzan has published three poetry collections, including Domestica and An Ordinary Evening. A preeminent translator of Spanish into Hebrew, she has translated over forty books and won numerous awards for her work. Rachel Tzvia Back, poet, scholar, and professor of literature, has translated many works from Hebrew, including the poetry of preeminent Hebrew poet Lea Goldberg published in Lea Goldberg: Selected Poetry and Drama. Her most recent poetry collection is On Ruins & Return. She lives in the Galilee, in the north of Israel.
Loading...
or
Not Currently Available for Direct Purchase