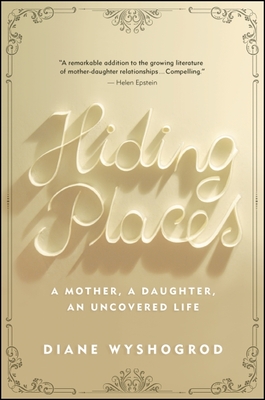 A Mother, a Daughter, an Uncovered Life (Excelsior Editions)

Finalist for the 2013 Montaigne Medal presented by Hopewell Publications

What's it like to spend sixteen months in hiding, crouching in a tiny cellar, during the dark years of World War II? To know that many of your friends and relatives have either been shot or sent to concentration camps? To have your life depend on the humanity of an elderly Christian couple who lets you hide under their floor? What if you knew it had been your mother crouching under that floor? Wouldn't you wonder how she stood it? How it felt? What it did to her? And how it all affected you? In Hiding Places, Diane Wyshogrod traces the process of discovery and self-discovery as she researched the experiences of her mother, Helen Rosenberg, who as a teenager hid in just such a cellar, in Z lkiew, Poland. The narrative, which moves between New York, pre-war and wartime Poland, and Jerusalem, is based on many hours of recorded interviews and covers Helen's life before, during, and after World War II. Although Wyshogrod's original intention was simply to record her mother's experiences, piecing the narrative together proved difficult: there were numerous gaps, things her mother could (or would) no longer remember, and other things her daughter just couldn't comprehend. To fill in these gaps, Wyshogrod draws from all the facets of her identity--writer, clinical psychologist, daughter, mother--in an attempt not only to understand her mother's experiences, but to find out why it is so important for her (and for us) to make that attempt in the first place.

Diane Wyshogrod is a clinical psychologist and writer. Born in New York City, she currently lives in Jerusalem with her husband and three sons.
Loading...
or
Not Currently Available for Direct Purchase