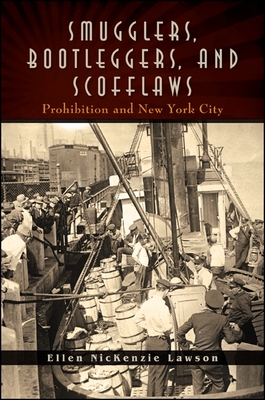 With the passage of the Eighteenth Amendment, "drying up" New York City promised to be the greatest triumph of the proponents of Prohibition. Instead, the city remained the nation's greatest liquor market. Smugglers, Bootleggers, and Scofflaws focuses on liquor smuggling to tell the story of Prohibition in New York City. Using previously unstudied Coast Guard records from 1920 to 1933 for New York City and environs, Ellen NicKenzie Lawson examines the development of Rum Row and smuggling via the coasts of Long Island, the Long Island Sound, the Jersey shore, and along the Hudson and East Rivers. Lawson demonstrates how smuggling syndicates on the Lower East Side, the West Side, and Little Italy contributed to the emergence of the Broadway Mob. She also explores New York City's scofflaw population--patrons of thirty thousand speakeasies and five hundred nightclubs--as well as how politicians Fiorello La Guardia, James "Jimmy" Walker, Nicholas Murray Butler, Pauline Morton Sabin, and Al Smith articulated their views on Prohibition to the nation. Lawson argues that in their assertion of the freedom to drink alcohol for enjoyment, New York's smugglers, bootleggers, and scofflaws belong in the American tradition of defending liberty. The result was the historically unprecedented step of repeal of a constitutional amendment with passage of the Twenty-first Amendment in 1933.

Ellen NicKenzie Lawson is a retired professional historian and the editor of The Three Sarahs: Documents of Antebellum Black College Women (transcribed with Marlene D. Merrill). She lives in Loveland, Colorado.
Loading...
or
Not Currently Available for Direct Purchase