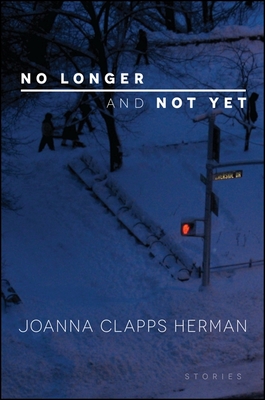 No Longer and Not Yet

The stories in No Longer and Not Yet look at the ways our lives are lived in the split seconds between what is no longer but is still not yet. Most take place on Manhattan's iconic Upper West Side, in the shops, hallways, and parks that reveal this well-known "big city" neighborhood for the tiny, even backwater village it more often resembles. An Upper West Sider herself, Joanna Clapps Herman draws her characters honestly yet tenderly, revealing them as much through how they move--the slope of a shoulder, a vocal inflection, the weight of a football--as by what they do, as though their bodies speak the truths they can't express. Here, Hannah Arendt's ghost haunts the building where she once lived, a hawk carries the apparition of a lost loved one, a homeless woman becomes Demeter. Small moments and intimacies of life weave together to form a bigger picture: the squeak of the hotel bed, a leaf on a saucer, the quality of light in the therapist's office, the doorman's familiar jokes, the open cupboards, the unspoken words. These stories show that, although we may think of ourselves in larger mythic narratives, our days are set in the terrain that is the opposite of the vast.

Joanna Clapps Herman teaches creative writing in the MFA Graduate Program at Manhattanville College and at the Center for Worker Education, a division of City College of New York, CUNY. She is the author of The Anarchist Bastard: Growing Up Italian in America, also published by SUNY Press; coeditor (with Carol Bonomo Albright) of Wild Dreams: The Best of Italian Americana; and coeditor (with Lee Gutkind) of Our Roots Are Deep with Passion: Creative Nonfiction Collects New Essays by Italian-American Writers. She lives in New York City.
Loading...
or
Not Currently Available for Direct Purchase