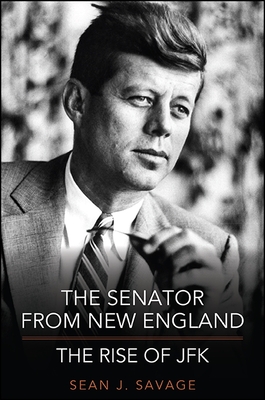 The Senator from New England (Hardcover)

The Rise of JFK

Gold Winner for Political Science, 2015 Foreword Reviews INDIEFAB Book of the Year Awards John F. Kennedy's path to the presidency began during his eight years of service in the United States Senate. In The Senator from New England, Sean J. Savage contends that Kennedy initially pursued a centrist, bipartisan course in his rhetoric and policy behavior regarding the regional policy interests of New England. Following his narrow defeat for the Democratic vice presidential nomination in 1956 and his nationwide speaking campaign for Adlai Stevenson, JFK's rhetoric and policy behavior became more partisan and liberal, especially during the 1958 midterm elections. While JFK claimed that he still protected and promoted the policy interests of New England on a bipartisan basis, he used his speaking engagements to interact with Democratic politicians throughout New England in an effort to secure the entire region's delegate votes at the 1960 Democratic National Convention. Based on the use of primary sources, archives, and special collections from four presidential libraries, the Library of Congress, Boston College, the Margaret Chase Smith Library, the Massachusetts Historical Society, and other institutions, The Senator from New England provides an unrivaled glimpse into Kennedy's Senate career and early presidential campaign strategy.

Sean J. Savage is Professor of Political Science at Saint Mary's College and the author of JFK, LBJ, and the Democratic Party, also published by SUNY Press.
or
Buy Here
(This book is on backorder)
Copyright © 2020 American Booksellers Association