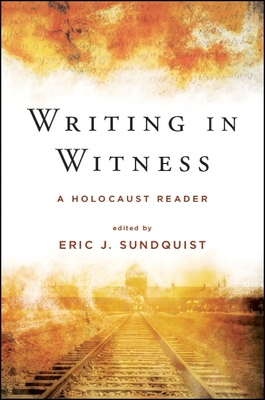 Finalist for the 2019 National Jewish Book Award in the Anthologies and Collections Category presented by the Jewish Book Council Silver Winner for Anthologies, 2018 Foreword INDIES Book of the Year Awards Writing in Witness is a broad survey of the most important writing about the Holocaust produced by eyewitnesses at the time and soon after. Whether they intended to spark resistance and undermine Nazi authority, to comfort family and community, to beseech God, or to leave a memorial record for posterity, the writers reflect on the power and limitations of the written word in the face of events often thought to be beyond representation. The diaries, journals, letters, poems, and other works were created across a geography reaching from the Baltics to the Balkans, from the Atlantic coast to the heart of the Soviet Union, and in a wide array of original languages. Along with the readings, Eric J. Sundquist's introductions provide a comprehensive account of the Holocaust as a historical event. Including works by prominent authors such as Primo Levi and Elie Wiesel, as well those little known or anonymous, Writing in Witness provides, in vital and memorable examples, a wide-ranging account of the Holocaust by those who felt the imperative to give written testimony.