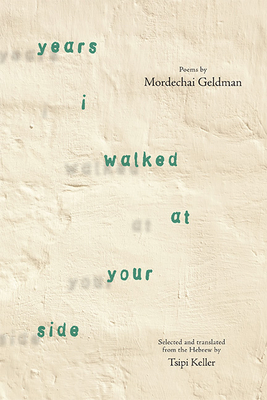 Years I Walked at Your Side (Paperback)

Finalist for the 2018 National Jewish Book Award in Poetry presented by the Jewish Book Council from "At Your Side"
Years I walked at your side like our prophet Isaiah barefoot naked and bare I will put on no cover until you see me until you recognize an other one person at least and so know yourself as well
Mordechai Geldman came of age as a poet in the seventies, an auspicious and transformative time in the development of modern Hebrew literature, as poets and writers rejected the flowery, the hyperbolic, and the sentimental and opted instead for a more direct and intimate speech. While his early poems tended to rely on linguistic exploration, his vision soon turned inward, as he came to favor the simple, the true, the authentic. Geldman's poems are direct and accessible, touching on and revealing the divine and the sacred in the so-called mundane.

Mordechai Geldman was born in Munich in 1946 and arrived in Israel in 1949. An art critic, artist, author, poet, and psychotherapist, Geldman has published fourteen volumes of poetry and five essay collections, and is the recipient of the Chomsky Award, the Brenner Prize, the Yehuda Amichai Prize for Hebrew Poetry, the Prime Minister's Prize for Hebrew Writers, and the Bialik Prize in Literature. His work has been translated into English, Arabic, Czech, French, Greek, German, Italian, Polish, Romanian, Serbo-Croatian, Spanish, Japanese, Portuguese, and Vietnamese. He lives and works in Tel Aviv.Tsipi Keller is a novelist and translator. Her previous translations include Poets on the Edge: An Anthology of Contemporary Hebrew Poetry and Reality Crumbs: Selected Poems, by Raquel Chalfi, both also published by SUNY Press.
or
Not Currently Available for Direct Purchase
Copyright © 2020 American Booksellers Association