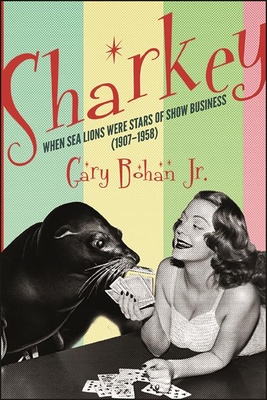 Sharkey is the natural artist, performing his magic for nothing but love. -- Wolcott Gibbs, the New Yorker

Sharkey tells the compelling story of an unusually gifted, trained sea lion who shared the stage with practically every important performer of the first half of the twentieth century--from Bob Hope to Ella Fitzgerald, from Broadway to Hollywood and beyond. Readers follow Sharkey and his flippered colleagues as they travel the world with stops at the Ringling Bros. and Barnum & Bailey Circus, vaudeville houses, Manhattan during the Harlem Renaissance, burlesque nightclubs, movie palaces, Radio City Music Hall, and the legendary studios of early radio, movies, and television, meeting a who's who of showbiz entertainers, sports superstars, and even a US president. Meticulously researched and lavishly illustrated, Sharkey is a quirky slice of New York and entertainment history sure to delight fans of vintage pop culture and Americana, as well as animal lovers.

Gary Bohan Jr. hails from Kingston, New York, where Sharkey was trained and is the great-grandson of Sharkey's trainer, Mark Huling. Mr. Bohan also plays trumpet and has performed with the Klezmer Conservatory Band, Joel Grey, and Itzhak Perlman.
Loading...
or support indie stores by buying on