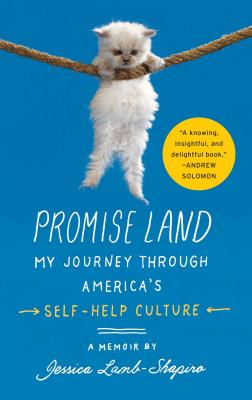 My Journey through America's Self-Help Culture

“A funny yet surprisingly nuanced look at the legends and ideas of the self-help industry” (People, 3.5 stars), Promise Land explores the American devotion to self-improvement—even as the author attempts some deeply personal improvements of her own.

Raised by a child psychologist who was himself the author of numerous self-help books, as an adult Jessica Lamb-Shapiro found herself both repelled and fascinated by the industry: did all of these books, tapes, weekend seminars, groups, posters, t-shirts, and trinkets really help anybody? Why do some people swear by the power of positive thinking, while others dismiss it as so many empty promises?

Promise Land is an irreverent tour through the vast and strange reaches of the world of self-help. In the name of research, Jessica attempted to cure herself of phobias, followed The Rules to meet and date men, walked on hot coals, and even attended a self-help seminar for writers of self-help books. But the more she delved into the history and practice of self-help, the more she realized her interest was much more than academic. Forced into a confrontation with the silent grief that had haunted both her and her father since her mother’s death when she was a baby, she realized that sometimes thinking you know everything about a subject is a way of hiding from yourself the fact that you know nothing at all.

Praise For Promise Land: My Journey through America's Self-Help Culture…

“Jessica Lamb-Shapiro has an unusual relationship to the self-help industry: her father is a child psychologist who has authored numerous books on the subject. Lamb-Shapiro’s inherent ambivalence is at the heart of Promise Land: My Journey through America's Self-Help Culture, in which the author immerses herself in the world of seminars, mantras, and self-improvement, all the while exploring the nation’s enduring fascination with perfection. By turns funny and sad, the book is, ultimately, a deeply personal story—and a really good read.”
— ParisReview.org

“A sincere and hilarious picture of the personalities and ideas found in this field of self-promotion and discovery. . . . Lamb-Shapiro’s journey through self-help culture fascinates and entertains, and as much as it also serves as a quasi-memoir, it excels.”
— Publishers Weekly (starred review)

“A brave, personal book in which the author discovers the best of the self-help industry, despite its many flaws.”
— Kirkus Reviews

“[Lamb-Shapiro] writes in a mordant, deadpan voice with impeccable economy and timing. She presents wry dispatches from the assorted subcultures she explores, and in her telling they range from the gauzily mystical to the shamelessly mercenary.”
— Bookforum

“With mordant wit and spectacular bravado, Jessica Lamb-Shapiro deconstructs not only the ludicrous self-help industry, but also the infinite personal vulnerabilities that it exploits. This is a knowing, insightful, and delightful book.”
— Andrew Solomon, New York Times bestselling author of The Noonday Demon and Far From the Tree

“Here are two important self-help rules. Buy this book. Read this book. You’ll feel better about yourself and the world. Promise Land is funny but not sneering. It’s poignant but not maudlin. It’s smart but not pretentious. This is gazpacho for the soul, which I much prefer to chicken soup.”
— A.J. Jacobs, New York Times bestselling author of Drop Dead Healthy

“Promise Land is not only a raucous, engaging account of all the hope, despair, faith, fear, falsity, and truth that comprises America’s centuries-old obsession with self-improvement. It is also a deeply felt personal story about family, secrecy, and grief. Read it and you might just find yourself improved.”
— Daniel Smith, New York Times bestselling author of Monkey Mind: A Memoir of Anxiety

“I can’t think of a nonfiction writer since David Foster Wallace as adept at pivoting from slapstick linguistic virtuosity to whip smart analysis to incomprehensible pathos—at times, all within the same paragraph! The druids of our contemporary self-help culture will need to write a new ‘Chicken Soup’ book to soothe their own souls if they accidentally read Jessica Lamb-Shapiro’s epic, hilarious Promise Land. Everyone else will just be delighted.”
— Mark Binelli, author of Detroit City is the Place to Be

“Lamb-Shapiro, herself the loving daughter of an aspiring self-help guru, gives a funny yet surprisingly nuanced look at the legends and ideas of the self-help industry [ . . . ] she’s deeply sympathetic to the impulse that fuels the industry: I can be happy if I just change . . . something.”
— People (3.5 stars)

"There’s no shortage of books featuring “cultural history” and other quasi-sociological surveys of this terrain, but Lamb-Shapiro’s take is different. Part experiential journalism, part memoir, Promise Land is both funnier and more searching than detached forms of social commentary could ever hope to be."
— Salon.com

Jessica Lamb-Shapiro has published fiction and non-fiction in The Believer, McSweeney’s, Open City, and Index magazine, among others. She has been a fellow at the MacDowell Colony and the New York Foundation for the Arts. She lives in New York City and Columbia County, NY.