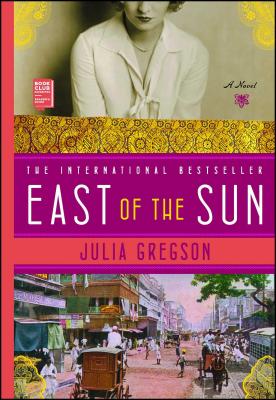 East of the Sun

“Julia Gregson's second novel is set in the late 1920s and tells the story of three women traveling to India as part of the 'Fishing Fleet,' English women in search of husbands. A fascinating novel.”
— Lilo Eder, Fort Ashby Books, Fort Ashby, WV
View the List

From award winner Julia Gregson, author of Jasmine Nights, this sweeping international bestseller brilliantly captures the lives of three young women on their way to a new life in India during the 1920s.

As the Kaisar-I-Hind weighs anchor for Bombay in the autumn of 1928, its passengers ponder their fate in a distant land. They are part of the “Fishing Fleet”—the name given to the legions of English women who sail to India each year in search of husbands, heedless of the life that awaits them. The inexperienced chaperone Viva Holloway has been entrusted to watch over three unsettling charges. There’s Rose, as beautiful as she is naïve, who plans to marry a cavalry officer she has met a mere handful of times. Her bridesmaid, Victoria, is hell-bent on losing her virginity en route before finding a husband of her own. And shadowing them all is the malevolent presence of a disturbed schoolboy named Guy Glover.

From the parties of the wealthy Bombay socialites to the poverty of Tamarind Street, from the sooty streets of London to the genteel conversation of the Bombay Yacht Club, East of the Sun takes us back to a world we hardly understand but yearn to know. This is a book that has it all: glorious detail, fascinating characters, and masterful storytelling.

Praise For East of the Sun: A Novel…

"I always wish for books like this, but they are rare -- a beautifully written, compelling saga that is impossible to put down. It's about ambition, love, survival, and the friendship of three women who leave England for the exotic and sometimes frightening adventure of India. Reading this is an escape to another place and time where friends and romance are waiting." -- Delia Ephron

"I felt like I'd packed a steamer trunk and was part of the group going out to India. What a gorgeous read. Exciting, romantic, unpredictable, and funny. I didn't want it to end." -- Tracey Ullman

"With lavishly detailed settings and every character, however marginal, fleshed out to perfection, Gregson's historical novel is a sweeping, emotional read" -- Booklist

“This is the kind of book I always hope to find…When I got to page 3, I wrote in my notes, ‘I may fall in love with this book.’ And I did.” – [Richmond] Record-Courier

Julia Gregson has worked as a journalist and foreign correspondent in the UK, Australia, and the US. She is the author of East of the Sun, which was a major bestseller in the UK and won the Romantic Novel of the Year Prize and the Le Prince Maurice Prize there, and Monsoon Summer. Her short stories have been published in collections and magazines and read on the radio. She lives in Monmouthshire, Wales.
Loading...
or support indie stores by buying on