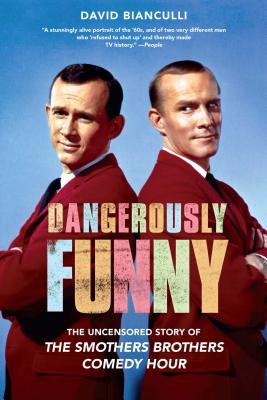 The Uncensored Story of "The Smothers Brothers Comedy Hour"

Now in paperback, a rollicking history of the rise and fall of The Smothers Brothers Comedy Hour —“A stunningly alive portrait of the 1960s and of two very different men who ‘refused to shut up’ and thereby made TV history” (People).

A dramatic behind-the-scenes look at the rise and fall of The Smothers Brothers Comedy Hour—the provocative, politically charged program that shocked the censors, outraged the White House, and forever changed the face of television.

Decades before The Daily Show, The Smothers Brothers Comedy Hour proved there was a place on television for no-holds-barred political comedy with a decidedly antiauthoritarian point of view. Censorship battles, mind-blowing musical performances, and unforgettable sketches defined the show and its era. In this compelling history, veteran entertainment journalist David Bianculli draws on decades worth of original research, including extensive interviews with Tom and Dick Smothers and dozens of other key players, to tell the fascinating story of the show’s three-year network run—and the cultural impact that’s still being felt today.

Praise For Dangerously Funny: The Uncensored Story of "The Smothers Brothers Comedy Hour"…

"It is hard for many of us to remember--back when there were only a handful of stations on the dial--just how profoundly influential and controversial the Smothers Brothers were. But David Bianculli's brilliant new book has brought it all back to vivid life. ...This is a superb, at times moving, portrait of an entire age -- seen through the dramatic careers of two endlessly interesting entertainers." -- Ken Burns, Filmmaker

"David's book documents a true prime-time crime caper pulled off forty years ago. The perpetrators got away. The Smothers Brothers and the American viewing audience paid the price. As another old saying goes, 'Freedom is a dangerous way of life.' It was ours -- and thanks to David, this is our story." -- Mason Williams, writer for The Smothers Brothers Comedy Hour

"David Bianculli details the Smothers Brothers' challenging of the CBS censors and the politicians of the '60s, and gets it exactly right. The Smothers Brothers deserve to be placed alongside Lenny Bruce, Richard Pryor, and other rebellious comedy spirits who were willing to risk everything for what they believed. Compelling from start to finish -- a book to cherish." -- David Steinberg

David Bianculli has been a television critic for more than thirty years, currently on NPR’s Fresh Air with Terry Gross and at www.tvworthwatching.com. He is also the author of two books on television and its impact: Teleliteracy: Taking Television Seriously and Dictionary of Teleliteracy: Television’s 500 Biggest Hits, Misses, and Events.